We sent two different Londonistas to ‘Crazy For You’ at Regent’s Park last night. They sat together, but did they see the same show? 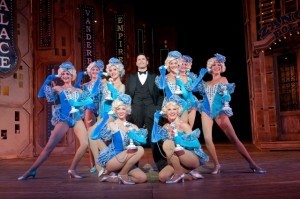 SAM says: If your only idea of theatrical bliss concerns Socratic dialogue, intellectually challenging subject matter or contemporary social commentary, then by all means avoid Crazy for You like the plague.

The other ninety-five per cent of people, however, who are quite capable of lightening up for an evening, should head to Regent’s Park for what could be the all-singing, all-dancing extravaganza of the year. George and Ira Gershwin’s Crazy for You is a show about putting on a show, and its plot is as corny as its gags. With a host of toe tapping tunes, however, and a message that even the tiniest person can make their dreams come true, it remains an engaging, if not utterly compelling, experience.

Timothy Sheader’s production milks the songs’ entertainment value for all their worth, while Stephen Mear’s choreography makes ‘Slap That Bass’ and ‘I Got Rhythm’ feel incredibly intimate in the large open air performance area. With strong all-rounders Clare Foster and Sean Palmer in the leading roles, if you’re not humming K-ra-zy for You as you leave you are probably one of the five per cent of people who should never have gone in the first place.

JOHNNY says: “My bonds and shares may fall downstairs. Who cares, who cares? I’m dancing and I can’t be bothered now” As an antidote to worrying about London-wide looting and a stockmarket in free-fall, those zeitgeisty Gershwin brothers provide the perfect escape.

They also prove that if the choonz are prime, you don’t need a Ghost-ly multi-million pound staging or a soapstar in a wife-beater vest to pull the crowds - Crazy’s selling well - and the cast, all but six of whom are new to Regent’s Park, give it welly throughout.

The plot and dialogue (by Ken Ludwig whose Lend Me a Tenor just tanked in the West End) are slight and bear no resemblance to ‘Girl Crazy’ from which most of the music originates: the ‘other’ Gerswhin compilation musical ‘My One and Only’ is far better constructed and due a revival. But, but, but … the songs are impeccable and the magic triumvirate of director Sheader, choreographer Mear, and MD Gareth Valentine whose orchestrations really fire up the band – is currently unbeatable.