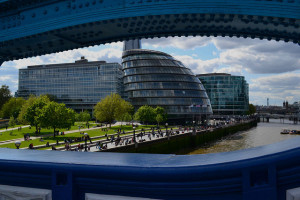 And we're back in the room. Five new Assembly members and a freshly victorious Mayor, though Boris doesn't seem to quite realise he's won the election, as his update (meant to let the Assembly know what's happened since the last one, in this case 9 March) was a version of his campaign stump speech. Odd.

Odder still was a moment halfway through proceedings when Nicky Gavron asked the Mayor how the new Homes for London department will differ from the London Housing Board, a question we pondered ourselves last week. Questioned about Shelter's Homes for London pledge that he signed during the campaign, specifically the parts about protecting people who rent privately (clamping down on letting agents, fairer rents via a Londonwide letting agency and secure tenancies), the Mayor didn't seem to know what he'd put his name to.

I'm going to have to study the detail of that... I may have had a lot of publicity about [the pledge] but not enough for it to come to my attention

Cue dropped jaws around the chamber and public gallery. We all know that electioneering is a shameless sport, but we rather hope the officials agreeing to high profile campaigns find the time to brief their candidate properly. You can watch the exchange yourself on the archived webcast, at 1 hour 25 minutes in, which also includes the Mayor – possibly realising he'd been caught out – launching into a furious attack on Nicky Gavron moments later.

New Lib Dem member Stephen Knight had clearly been at his calculator: he challenged the Mayor over his claim to be creating 104,000 jobs through the housing programme. Stephen pointed out that the construction programmes account for around 25,000 jobs each year, wondering if Boris was claiming each person employed each year as a new job:

These jobs are also continuations of the current housing programme; in other words, they already exist. Stephen told the chamber there would be fewer than 200 brand new jobs created by additional house building, prompting a great hoo-ha from Boris about how he'd love to meet these few "heroes" who would be building thousands of houses by themselves, and failing to address the thrust of the question.

Andrew Dismore, Brian Coleman's conqueror, started as we suspect he means to go on. A House of Commons veteran, he's like a terrier who won't let go until he's got his answer and clearly isn't impressed by the trademark Boris bluster. These two will come to blows sooner rather than later; their encounters are going to be fascinating to watch.

Unlike many Mayor's Question Times this year, we actually got some information. Boris said Transport for London is "looking at the steps needed and implications" of implementing Dutch-style cycling. Vauxhall Cross and Greenwich will be the locations of two of three flagship cycle schemes, and Caroline Pidgeon said that of TfL's review of 500 dangerous junctions, just 39 have been looked at in five months and six passed fit for purpose with no changes needed. TfL says no final decisions have been made. In other comments destined to rile cyclists, Boris repeated his insistence that Elephant and Castle is fine so long as you keep your wits about you, and said that two out of three cyclists killed or seriously injured were breaking road rules at the time.

The Mayor will also be holding monthly Q&A sessions on Twitter, the cost of reducing the Freedom Pass to include 60 year olds could be passed on to local councils (the Freedom Pass is run by London Councils, but Val Shawcross was hoping that as this was a Mayoral pledge TfL would bear the cost), the New Bus for London will go into production next year, the number of people spending more than one night sleeping rough has increased 21% (a figure, from Darren Johnson, that Boris dismissed as "talking crap"). There were also the usual bitter accusations across the floor but we thought we'd let that slide at this, the start of the school term.

In a sign of how the next four years will pan out, the Assembly later symbolically rejected Boris's appointment of Daniel Moylan to the London Legacy Development Corporation (the post-Olympics body). It''s got absolutely no force behind it, but is basically the left groups firing a warning shot across the Mayor's bows – he's going to have a tougher ride.

Photo by Mount Fuji Man from the Londonist Flickr pool. You can watch an archived webcast of yesterday's Question Time or attend the next one yourself: it's at 10am on 13 June at City Hall.