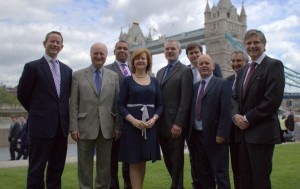 Brief London politics news: the London Assembly has divvied up the committee chairs in such a way that we expect to see more Tory walkouts from the Chamber, along the lines of that which scuppered a debate on cycling safety last year.

The left-leaning parties (Labour, Liberal Democrats, Greens), who hold 16 of the Assembly's 25 seats, have brokered a deal to "share power in the operation of the Assembly" (see PDF of the document obtained by Mayorwatch). It says there are "a number of positions for the Conservative Group" but perhaps they had looking after the sandwiches in mind, since of the roles that have been allocated so far, Roger Evans is the only Tory Assembly Member to get one: Deputy Chair of the Audit Panel.

Of course, Conservative AMs Kit Malthouse, James Cleverly and Victoria Borwick have been the lucky recipients of top appointments from Boris, but that hasn't stopped them complaining bitterly:

For anyone still interested, Jennette Arnold (Labour) is Assembly Chair for another year with Darren Johnson (Green) her Deputy. We'll be back at Mayor's Question Time in a couple of weeks and will report whether it continues to be as bad tempered as it was pre-election.