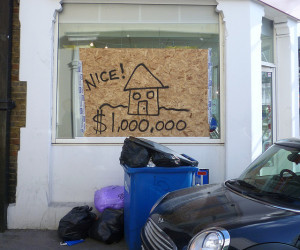 Private rents in London have risen 4.5% over the last year, making the average London rent £1,032 a month. A few weeks ago we looked at how renting in the capital is increasingly moving out of reach: a two bedroom flat calls for a combined wage of £52k.

Shelter spent the election campaign calling for a Transport for London-style agency to deal with housing. Boris Johnson has now created a department called Homes for London, but so far it's just the old department with a new name. Shelter has set out what "HfL" needs to do to make a difference to all Londoners:

All the Mayoral candidates we asked said that housing was London's most pressing problem, but it's one that remains largely hidden to most people until they try to move. The Institute for Public Policy Research agrees with the analysis that London is facing a housing crisis, calculating the city will have a housing gap of 325,000 homes by 2025 unless serious action is taken. We'll be keeping an eye on Homes for London to check it doesn't end up a paper tiger.