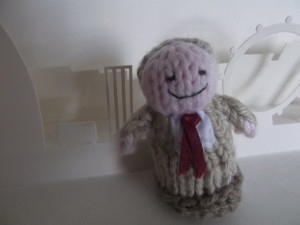 Yesterday we posted Boris Johnson's responses to questions posed after we met him at Borough Market. Now here are answers to questions we didn't have time to ask Ken when we met him in Peckham:

You've been doing this, or something like it, on and off for 30 years. Why do you still want it?
It’s not about me or Boris Johnson but eight million Londoners. Londoners are really struggling under a Tory-led government that’s pushed us back into recession, with high rents, high energy bills, cuts in police numbers and inflation-busting fares increases from the Tory mayor. I care about London and I cannot stand by. My kids are growing up here now, and I don’t want them living in a city where no one is taking action to put Londoners first.

Is this your last hurrah?
As I say I really don’t see this as being about me. It’s about London. If I'm elected on 3 May, I will be implementing the latest of the large cuts I've made in fares over the course of my time in politics. That's because I've always believed Londoners deserve better, I’m committed to a sustainable city, and that my job as a politician is to make them better off. I will always believe that.

Can you really work with a Tory-led government? Won't they have an interest in frustrating your every move?
If you don’t like what the Tories are doing to the country, ask yourself if you can seriously let them get away with it by doing anything other than voting Labour on Thursday. The Tory-led government has had a free ride from the Tory mayor. They cut £2.1bn from transport investment and he rolled over.

They will have a much harder time making cuts with a Labour mayor in charge. First, they can't claim that they have a mandate for cuts in London, as they surely will if Boris Johnson is elected. Second, do they really want to go into a general election where the London mayor is pointing out they are making cuts to the police, or to transport, or pushing up their fares? That would be political masochism. I don’t believe they would do it.

How do you respond to the Factcheck that said your fare promise was rubbish?
Eleven professors of economics have written a letter to the Guardian saying that my fares cuts are 'easily affordable'. I don't know of anyone who is better qualified to assess the issue than them. Bear in mind, I’ve been Mayor before – I would never do anything to damage Londoners’ interests. I am so committed to this policy and so convinced it is the right thing to do that I will resign as Mayor if I do not cut the fares on or by 7 October this year.

To get to grips with London's housing crisis, where would you put these new houses and how would you make sure schools and transport can cope?
Unaffordability of both rents and house prices is directly related to the fact that there aren't enough new homes being built. Under Boris Johnson, in the last 6 months just 56 new affordable homes were started in London, when there are over 300,000 households on waiting lists. When we won the Olympics for London, for me it was less about the Games than the regeneration that is now possible because of land reclamation.

I will ensure there is greater investment in transport infrastructure simply by spending the investment that has been allocated. When the recession came, the Tory mayor boasted that he was cutting further and faster than the Coalition. As a result, over the last four years there has been over £1.2bn that hasn't been spent that was allocated to investment.

The Tory-led government is already facing a crisis of lack of school places in London. As mayor, Boris Johnson has been arguing for Latin classes. I would argue for increased investment in a schools building programme, which would have wider economic benefits.

If Londonist gave you £60m, how would you make London better?
My fares cuts are funded by the surpluses at Transport for London. My pledges to cut energy bills and rents are funded by cutting out the profits of the big energy companies and the rip-off lettings agents. Getting police numbers back up is funded by charging private bodies the proper costs for their policing resources, such as the airports. EMA is funded by drawing on the resources of schools, colleges, universities and local authorities who all want to make this happen.

So, with an extra £60m I would probably split it and add money to support for childcare, so that more families could benefit as they go back to work. The rest I would look to spend on improved training and apprenticeships for our youth, who are facing years without work otherwise. If I win, can I look forward to the Londonist childcare/apprenticeship Fund?

Knitted Ken made by Heather Brown.