Ken On The Campaign Trail 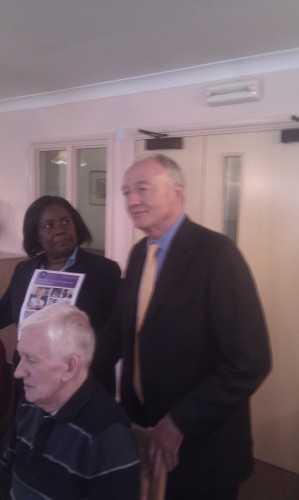 It's Thursday morning, we’re at the Greenhive old people's home in Peckham, and Labour’s candidate for mayor is expounding the many advantages of owning a snake.

"They're better at catching mice than a cat is," Ken Livingstone is muttering to an aide, as they examine a photograph of the reptile in question. As it turns out, they can slither to the parts that other rodent-catchers can't reach. We don’t catch the entire conversation, but do hear Ken say, quite distinctly: "And the next time we saw it, it was twice the size."

This morning, Ken and his proposed deputy, Southwark Assembly Member Val Shawcross, are touting the benefits their victory would have for London's older population. The press trip has been organised with the blessing of the home's owners, Anchor, whose PR team are trying to get coverage for the grey pride campaign. But still, as we find ourselves in the way of a wheelchair for the fourth time, there’s a lingering sense this isn’t actually something a working care home needs.

The home is, as these things go, nice. The door to every room is labelled with a name tag, a photograph of its occupant and pictures telling you something about them (of beloved animals, say, or an Arsenal strip). And while an odour combining hot breakfasts with other, less sanitary substances is all-pervasive, the home is comfortable, light and clean. One of residents praises her carers to the heavens and, rather sweetly, asks Ken to get them a pay rise.

All the same, though, there's something faintly odd about the entire experience. Twenty minutes in, we're led into the activity room, where monochrome English flags are laid out alongside pots of red paint for an afternoon’s colouring in (St George's Day, you see). As Jerusalem reaches its crescendo, to be replaced by an inspirational bit of oratory from Winston Churchill, it's hard to escape the feeling you’ve fallen into a particularly surreal dream.

It's at roughly that point that Ken starts talking about snakes.

Besides Londonist, along for the ride this morning are a reporter from Metro, a small BBC camera crew, and a well-known right-wing political commentator, who greets Ken by holding up a copy of his book and smirking. "Are you enjoying it?" Ken asks cheerily, as he shakes his hand. "It's good, isn't it? Nice to be able to get the last word in somewhere."

And, more often than not, this enthusiasm is reciprocated. In the kitchens, as Ken claims he still feels like he’s 40, the young woman he’s talking to tells him he looks it. One resident is keen to tell him they've met before, back when she was a bus conductor for the GLC. Ken’s eyes light up: "Oooh, what route?" (The 63 and 78, as it happens; clearly a lifelong Peckham girl.)

Much of this is just the grin-and-grip of the campaign trail, of course. Livingstone is well-practiced in pivoting effortlessly from other people’s life stories to his manifesto (when one resident tells him of her girlhood in Dulwich, he comes back, quick as a flash, “You couldn't afford to live there now, could you?"). Just occasionally, it feels a little forced. At one point, he stops to talk to a cleaner, leaving the procession behind him blocking the corridor while he mutters, "Thanks for what you're doing for them." The cleaner shrugs, and goes back to her trolley.

All the same, there are touches you suspect you wouldn’t get from most politicians. At one point he discusses the best things to do with hydrangeas; at another he tries to educate the home’s residents about Zoroastrianism. (No idea.)

At some length, he explains the precepts of Keynesian economic theory ("I don't suppose anybody here is old enough to remember President Roosevelt...") Talking about the dangers of youth unemployment, Ken notes that this is an area where Germany has done very well, and someone shouts the reply, "Well they didn't do so well during the war, did they!"

Mostly Livingstone is clearly happy to talk about any subject that happens to come up; only once does he demur. When the right-wing commentator asks his opinion of Siobhan Benita's independent insurgency, Ken rolls his eyes. "There's always one, isn't there,” he shrugs. Then he goes off to talk to the residents, leaving Val Shawcross to do his dirty work.

At the end of the tour, Londonist is granted a few moments for questions; it's not much, and a lot of it’s clearly pre-prepared, but it's more than we got out of Boris.

Asked his thoughts on the tone of the campaign, Livingstone criticises, with some resignation, "the obsession with process rather than policy”. Boris’ record, he argues, is going un-scrutinised. “Perhaps someone like the Glasgow Media Group will analyse what proportion of the [coverage] was reporting the serious issues and what proportion the smears," he suggests. “That’d be interesting.”

Okay, we ask. You want us to write about policy – which policy matters the most? We're expecting him to cite that fare cut pledge, that the media has been so heartlessly cynical about. Actually, though, he points to the housing crisis. "The average two bedroom private rented flat is now taking the majority of the average wage in London. It’s not sustainable." At the moment, he says, "You've got whole families living in a shed at the bottom of the garden all over places like Newham and Ealing." (Redbridge, too, we can confirm.)

Fixing this will mean building half a million new homes by the end of the decade. Livingstone claims to have identified land for two-thirds of that, and to be looking into getting pension funds to pay for it: "It's a much more secure investment to build houses than to speculate in stocks and shares," he argues. Whether those funds would agree, and where the other 130,000 homes are going, is not entirely clear.

As a parting shot, and in a shameless attempt to provoke him, we ask about that cable car. “We looked at building one from the 02 to Canary Wharf,” he says, “but the finances didn’t stack up. It's a good tourist attraction, but it's not actually a basic means of transport.”

Then again, he adds, "As it's the most expensive cable car in history, we'll most probably name it after Boris." And, on that rather optimistic note, an aide bustles him away into a car.

Can Ken really make another comeback? Our trip to Peckham is a reminder that, despite the decline in his reputation, some Londoners retain a genuine affection for the city’s ex mayor. Out on the campaign trail, Livingstone says, he's been getting a warm reaction in Bromley, Bexley, Havering... the ethnically homogenous suburbs long written off to the Tories. If he can win votes there, well...

Well, he would say that, wouldn’t he? All the same, the BBC’s cameraman confirms Ken’s account. Four years ago, he told us, people were openly shouting abuse at the then-mayor. Now they’re coming up to him and shaking his hand.

The polls have narrowed, but still show Boris out ahead. Livingstone says that they're wrong – but he said that four years ago, too. Time will tell.