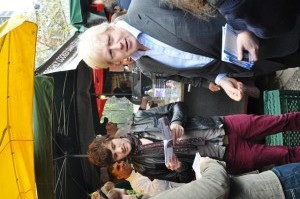 Londonist recently posed some questions to the mayor following his visit to Borough Market. Here are his responses:

What do you say to people who say that they have a good job but can’t afford to live in zone 2 or 3, therefore why should other people get help to live there?

Londoners are going through one of the toughest periods in recent memory. That is why I have focused all of our investment programmes on not just improving London’s transport network and regenerating the capital, but ensuring that we are growing London’s economy while keeping cost of living down. A large part of this is getting real value for money and I have started by cutting waste at City Hall to free up £3.5 billion for services. By putting taxpayer money where it has the biggest impact we have been able to put £445 back into Londoners’ pockets after cutting City Hall’s share of council tax, and if re-elected I will cut council tax by at least 10 per cent over the next four years.

I also want to make home ownership more affordable to help low and modest income Londoners on to the property ladder. That is why we launched the First Steps housing programme, helping 25,000 first-time buyers, and my plan is to boost this scheme further by delivering more than 18,000 First Steps homes to assist another 25,000 Londoners. And I want to launch London rental standards because I am committed to promoting an attractive and vibrant private rented sector. I have doubled the number of accredited landlords and launched London’s first Rents Map to allow the public access to information on rents to ensure they are being charged a fair price.

Your stance on high-rise developments seems to have reversed somewhat since 2008. Can you tell us why?

I introduced a new London View Management Framework to give greater protection to historic views because I believe it is important that we find a way of ensuring that new development fits with our built heritage. London must continue to be a desirable place to live, work and do business and I am determined to preserve the character of the capital by making sure new development makes a positive contribution to the characteristics and composition of designated views.

In 2008 you promised 1,000 black mentors to combat youth violence, can you give us your progress on this?

In the last election, youth violence was on the rise after 27 youths were murdered in 2007 alone. That is why I pledged to fund youth community groups that provide mentoring schemes and the Mayor’s Mentoring Programme is now providing appropriately trained adult volunteer mentors for at least 1,000 black boys aged 10-16 who may be at risk of offending. I have also supported a wide range of volunteering activities, such as Team London, which increase our sense of community and improve our shared experience of life in London. £2.6 million – which has been matched by philanthropic support – has been committed to projects supporting young people to reduce crime and improve community cohesion.

But successfully tackling youth violence in London cannot start and stop with mentoring schemes and volunteer programmes. That is why we launched Operation Blunt 2, which has taken 11,000 knives and guns off the street, and by putting 1,000 more police on the beat youth violence has come down 13.8 per cent, murders are at their lowest since the 1960s, and total crime in London is down 10.8 per cent.

Can you tell us more about your plans to improve things for cyclists in London?

A cycling revolution has swept London thanks to the world’s most successful Cycle Hire Scheme. It is something I am very proud of and I am determined to spread my love for cycling throughout the capital. That is why we have just extended it eastwards, adding 2,300 extra bikes and 4,800 extra docking points. The scheme now covers 65km2 of the Capital and I’ve asked Transport for London to plan for a westward expansion in 2013. Alongside Cycle Superhighways, we’re making cycling more accessible than ever before.

As a cyclist myself, I am well aware of the safety issues. We have done a huge amount to promote cycling and make it safer in London, with the number of cycling accidents causing injury down 10 per cent since I became Mayor, and launched the Cycling Safety Action Plan in 2010 which included promoting safety technology such as sensors and cameras, increasing adult cycle training, and developing a new Certificate of Professional Competence module on cycle safety awareness for lorry drivers. But we need to do more to remodel dangerous junctions and blackspots and I have instructed TfL to review over 500 junctions to identify potential cycle safety improvements such as the work already undertaken at places like Bow and Henlys Corner.

If Londonist gave you £60m, what would do to make London better?

In these tough economic times, it is important we do all we can to create new employment opportunities and grow London’s economy. That is why I want to create 200,000 jobs over the next four years by investing over £22 billion in London’s transport network, investing £221 million in local high streets to support small businesses, investing in 55,000 new affordable homes and a true Olympic legacy that will create 10,000 new jobs and 11,000 new homes.