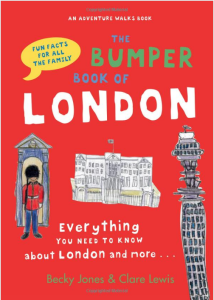 "All the reds in this book are London bus red (pantone 485)," declares the first page. "The Oldest Thing in London" is revealed on the final page. Sandwiched between, The Bumper Book of London crams in nearly 300 pages of London fun and fact that will charm you to the eyebrows.

This smashing new guide to the capital for children and families comes from Becky Jones and Clare Lewis, whose playful 101 Dalmatians map you might remember. The first half takes us on a chronological walk through London's history, from its Roman origins up to the present day. The second half picks themes, such as royal London, sport and 'the world in London'.

Londony goodness comes thick and fast, in a bricolage of facts, stories, lists, recipes, and delightful illustrations drawn by children. A tiny selection should give you a flavour: Famous Americans in London, random Tyburn facts, a history of puppets in London, best things to spend pocket money on, the City's medieval ceremonies, London's brutalist architecture... It's a book that will be lapped up by anyone with an inquisitive mind.

Like LEGO and Haribo sweets, you might buy the Bumper Book of London for your kids, but you'll soon be clawing it off them.

The Bumper Book of London by Becky Jones and Clare Lewis is out now from Frances Lincoln publishers. Buy here.

Browse all our London book reviews.