Boat Magazine: The Many Sides Of London Life

By M@ Last edited 115 months ago
M@ Boat Magazine: The Many Sides Of London Life 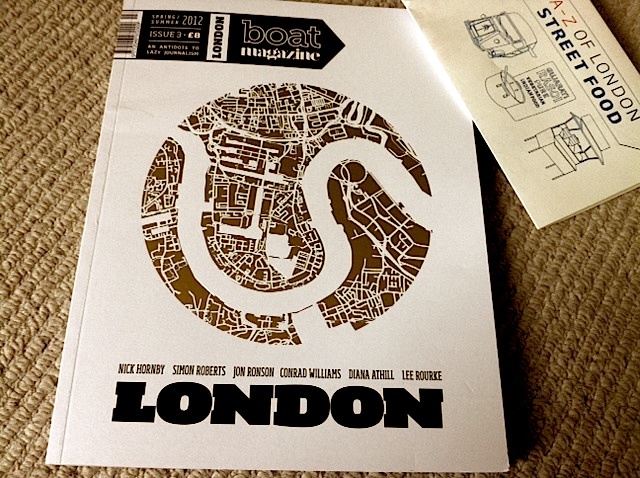 Don't be put off by the name, land lubbers. Boat Magazine has nothing to do with boats. It's a bi-annual publication that moves to a different "complicated city" for each issue. After covering Sarajevo and Detroit, Boat Magazine now moors up in London, with over 100 pages about the capital.

So what do you get for your £8? For starters, some thoughtful essays by the likes of Nick Hornby and Jon Ronson. The former writes about the evolving city — how his favourite shops and haunts of 20 years ago, including Highbury stadium, have now vanished. Ronson, meanwhile, takes a break from interviewing goat-staring men and the criminally insane to speak to young people affected by the closure of the Greenwich Youthreach councilling service.

Elsewhere, we find photos from the top decks of busses, the importance of wearing trainers for Londoners, insights into Nigerian, Muslim, Russian, Buddhist and Chinese subcultures within the city, changes within the Isle of Dogs, fiction by Lee Rourke, and interviews with an athlete, a local campaigner, a legendary publisher and people living in unusual places.

Given that it's published by Boat Studio, a design agency that tackles everything from theatre sets to album covers, you'd expect the magazine to look good, and it does. Photography and illustration are as important as the words. We're even treated to a pull-out A-Z guide to London's burgeoning street food scene.

Boat Magazine styles itself as "an antidote to lazy journalism". This is certainly true. It might add "and a beacon for balanced commissioning", with stories from many corners of the capital that cover any number of ethnicities, cultures, and world views.

There were 7.8 million ways to be a Londoner at last reckoning. No publication can tickle a fraction, but this one really pushes out the boat.

Buy Boat Magazine here, or in the shops soon. And don't forget the short film competition co-organised by Boat Magazine, which could win you a gig with the Guardian.