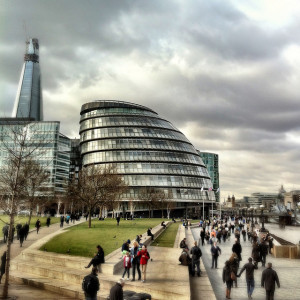 Last time out at City Hall we bitched about childish behaviour from the Tory part of the horseshoe (table banging, sycophantic questions, chanting) in support of Boris's budget and Mayoral candidacy. But it turns out electioneering is catching.

Let's remind ourselves, again, of the purpose of the London Assembly.

The 25 Assembly Members hold the Mayor to account by examining his decisions and actions to ensure he delivers on his promises to Londoners.

Their monthly opportunity to quiz the Mayor should, then, be a time to get information that's relevant and important to Londoners. (Questions are submitted in advance so the Mayor's team has time to research.) But this is politics, and we hear there's an election coming up, so a good chunk of the questions were about subjects the Assembly Member already knew the answer to and which would allow either Boris to trumpet good work or slam Livingstone (often referred to as "my predecessor" – has Boris been told not to mention Ken by name again?) or his political opponents to skewer him on promises unfulfilled.

Yes, some of the skewering could be classed as 'holding the Mayor to account', but at the end of the session it did rather feel like the opposition wanted to place a pair of devil horns on his head and stick a trident in his hand. Maybe they were just pissed off about him turning up late, hair artfully dishevelled (though not as late as Brian Coleman, who made his appearance two and a half hours into proceedings).

Conversely, every other Tory question was flipped by Boris to attack Ken's fare cut promise and a TfL-projected £1.12bn loss in fares revenue to 2015. A sensible question from Roger Evans about bus driving standards made passing reference to availability of wheelchair ramps, which was seized on by the Mayor as an example of something that could be lost under Ken. Boris's campaign has given us a breakdown of the projects they expect would be affected; TfL's income over the same period is predicted to be around £14bn so while £1.12bn is a sizeable chunk it wouldn't affect every single sodding transport issue all over London. If Boris trots out the same response every single time it's going to get very old, very quickly, and we might resort to posting photos of kittens instead of reporting MQT proceedings. Oh, and Boris never did say what he'd do about bus driving standards.

So thank you, Conservative members Victoria Borwick and Andrew Boff, who asked genuine questions about Games Lanes and crime in Olympic boroughs. It's going to be a long two and a half months.

The webcast of Mayor's Question Time is available to watch now. Transcripts will be available shortly. Photo by Laurabot_ from the Londonist Flickr pool. The first paragraph was edited after publication to try to clarify that pisspoor questioning came from all quarters.