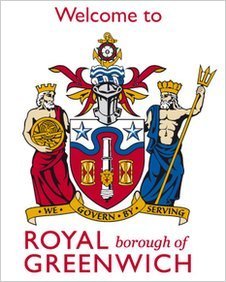 Today, Greenwich gets a regal promotion. The Borough will adopt a Royal appellation as part of the Queen's Diamond Jubilee celebrations. It joins existing Royal Boroughs Kensington & Chelsea and Kingston upon Thames in this privilege, and sports a new crest (right) to symbolise the new status.

The occasion will be marked with a fireworks display at Woolwich this evening. Further events, including more fireworks on Sunday, will take place across the weekend.

Greenwich certainly deserves the honour, at least from an historical perspective. Three monarchs — Henry VIII, Mary I and Elizabeth I — were born at the palace of Placentia, the long-demolished royal residence formerly on the site of today's Old Royal Naval College. Only St James's Palace can boast more Crown births. In addition, boy king Edward VI died at Placentia, and two of Henry VIII's marriages took place there.

Then there are, or were, many other 'Royal' buildings around the borough: the Royal Observatory (itself part of the newly branded Royal Museums Greenwich), the Royal Artillery, Dockyards and Arsenal downriver at Woolwich, and the Queen Elizabeth Hospital on the slopes of Shooters Hill.

Diamond Geezer has more on the naming, and similar bestowments around the country, while Darryl Chamberlain gives a local's view.