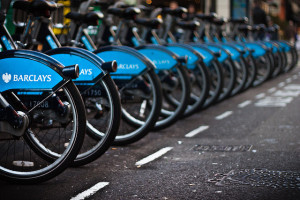 A Boris bike was involved in an accident with a HGV on Clerkenwell Road this morning.

Reports on Twitter suggest that the cyclist has emerged relatively unharmed; we'll update this post when we get further details. But the rear part of the bike itself, as shown in this picture, was mangled beneath the wheels of the vehicle.

The incident took place near the junction with Goswell Road,  close to the location where architect Rebecca Goosen was knocked off her bike and killed by a cement mixer in 2009. A quick glance at the map of road deaths in London suggests that this stretch of Clerkenwell Road is particularly lethal for cyclists, with a number of other riders losing their lives along it.  In fact the Clerkenwell Road/Farringdon Road junction was included in the Tour du Danger ride last November, which sought to highlight the capital's most dangerous cycling blackspots.

The accident is among the first serious ones involving the cycle hire scheme since its launch in July 2010 (discounting the time when a careless motorist ploughed into a docking station in Shoreditch) and is likely to reignite the debate about whether HGVs should be allowed in central London during rush hour.