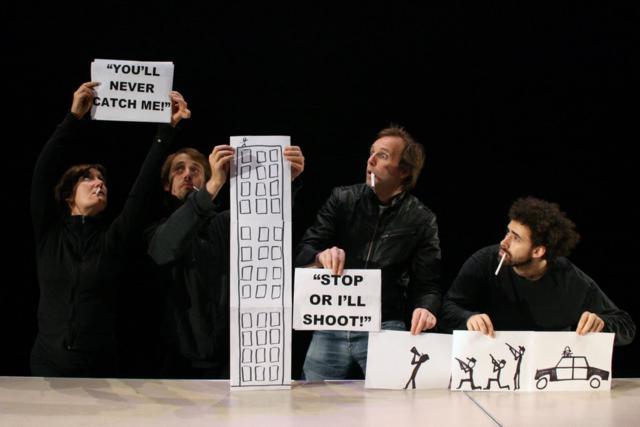 The London International Mime Festival (LIMF) is back again and leading the charge at the Soho Theatre is Blind Summit's puppet show The Table, a piece of bunraku brilliance which is as captivating as anything dreamed up by Walt Disney.

Bunraku, for those without a degree in theatre studies, is a form of Japanese theatre that makes use of visible puppeteers; recent examples include Avenue Q, the opener for last year's LIMF and the Complicite/Blind Summit collaborations A Dog's Heart and Shun-Kin. In the case of the first episode of this three-part production, there are neither strings nor hands up bottoms but three men who together manipulate the four appendages, torso and head of the chief character whose fiefdom is the eponymous apparatus.

The twist here is that most of the puppet's interactions are not with its own fictional world but with the very real audience in front of him. The only wall that matters in this show is the fourth wall and the puppet talks to us through it, describing its puppet life, its relationship with the puppeteers and its thoughts on the table itself. As he puts it himself:

You're going to have problems describing this later. It's just a puppet on a table: no scenery, no costumes, no horses. Was that fun?

If this all sounds rather meta, well, it is and all the better for it. Attempts towards the end of this episode to inject some dramatic tension feel incongruous with what has come before - imagine Pat Butcher's final scene slapped onto the end of Mongrels - but the show is rescued by the last two mimed episodes. Dark backgrounds, dark costumes and luminous limbs and skulls float around in a freaky sideshow which gives way to a finale taking the concept behind Bob Dylan's video for Homesick Subterranean Blues and exploding it every which way.

The Table continues at the Soho Theatre until 21 Jan and returns in May. More information can be found here.

Londonist attended at the invitation of the Soho Theatre press office.