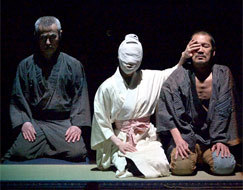 (c) Tsukasa Aoki
Considering how much Japanese drama has directly influenced stone-cold cinema classics like The Magnificent Seven, Star Wars and A Fistful of Dollars, we were looking forward to seeing how inventive theatre company Complicité's Japanese cast would bring to life Jun'ichiro Tanizaki’s Shun-Kin, a production which returns this month to the Barbican after last year's successful run.

Director Simon McBurney's play has several interesting angles. On the outside, this is a tale of the eponymous blind musician who at a young age whose apprentice Sasuke becomes her student and lifelong companion. The kink here is that the relationship between master and servant is underlined by sexual and sadistic shenanigans. Shun-kin physically, mentally and emotionally abuses the one person who truly loves her, gaining some kind of perverse pleasure as she torments him. She is too proud to marry Sasuke and gives away the children she conceives with him.

Another curious element is how a Japanese Bunraku puppet is used to bring Shun-ki to life for most of the play. As a girl, we see her as a head and arms above a kimono; as she grows into a woman, the puppet gains legs. In a memorable scene, Shun-kin solemnly wraps her wooden legs around the human Sasuke as they make love - a far cry from Avenue Q's take on puppet sex. In the final scenes, Shun-kin is replaced by a woman who gives a human face to the harrowing ending.

Before that ending, though, the audience has to sit through two hours of patient plotting which is not helped by the use of surtitles above and to the side of the stage. To see both the action on stage and understand what was being said, you would need to have one eye which is not so much lazy as positively comatose. We enjoyed another McBurney play which made a comeback this year - Complicité's A Disappearing Number - for its clever use of sound and video and its smart direction, very little of which is in evidence here.

Shun-kin is playing at the Barbican until November 13. Tickets are priced at £16-£40 and can be purchased here.

Our review of Complicité's A Disappearing Number.

We very much enjoyed the Catalyst Theatre's Nevermore, also at the Barbican.