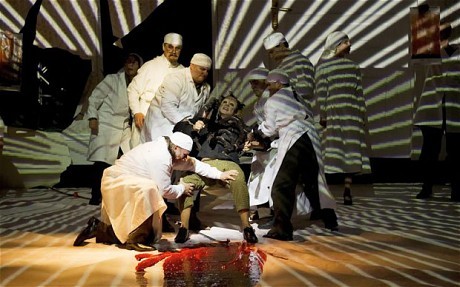 It’s not often that the star of an opera is a dog, but it was the appeal of such an unlikely hero that encouraged Simon McBurney, the highly regarded director of Complicite, to make his operatic debut.

Alexander Raskatov’s first opera, currently enjoying its UK premiere, is a take on Mikhail Bulgakov’s Heart of a Dog of 1925. In the novel the stray dog Sharik is given an organ transplant by Professor Preobrazhensky, but the mutt actually becomes a human (Sharikov) and wreaks havoc with his creator’s life. It is really a commentary on the Russian proletariat’s destructive tendencies following the revolution, and was consequently banned until 1987.

The dog is a puppet operated by several members of Blind Summit Theatre Company. Based on a Giacometti sculpture, its actions are highly realistic as it turns its head, limps around or chases cats. Its thoughts are captured by two singers, a counter-tenor (Andrew Watts) to portray his sweeter feelings and an alto (Elena Vassilieva) his more unpleasant ones. Visually the production is stunning with images of torrential storms, or Edward Muybridge dogs, appearing on a screen. Over the evening the damage to the set also accumulates as if to illustrate the increasing descent into chaos.

Steven Page captures Professor Preobrazhensky’s sense of superiority, while amidst his apparent repulsiveness Peter Hoare reveals Sharikov to be more victim than aggressor. The supporting cast also fare well, including Nancy Allen Lundy as the maid whose actions embody the idea of having to jump to it whenever her master calls.

The score, however, is more problematic. It is best (if not entirely accurately) described as a mixture of Shostakovich, Prokofiev, Stravinsky, Webern, Messiaen and Schnittke, but greater underlying unity is required to pull off the disjointed nature of the music. Still, it is the visual feast that is the reason for seeing this production, and it’s certainly reason enough.