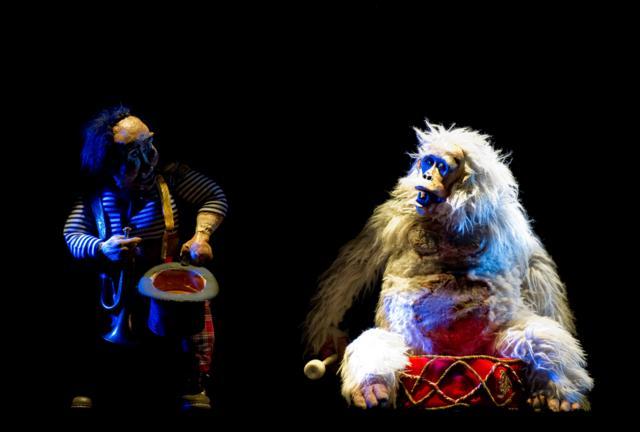 This year's London International Mime Festival was kickstarted by Teatro Corsario's La Maldicion de Poe (The Curse of Poe), a macabre and surreal take on the works of the godfather of Gothic horror and modern detective fiction. Young Edgar is in love with Annabel Lee, there's a a homicidal monkey on the run and the local drunk's marriage takes a dark twist after he gets into pussy-related trouble.

It's a curious choice as a mime festival curtain-raiser as there is a fair amount of chatter through this puppet show. One of the clever features here is how the puppets are animated; they are similar to Japanese Bunraku puppets as seen in Avenue Q or last year's Shun-Kin but instead of the performers appearing on stage, they are hidden in the darkness. In fact, the pitch darkness ensures that almost everything in the room is hidden except for the puppets and the stage - don't expect to be able to read the provided programme once the show gets started.

This show is aimed squarely at the teenage market - under-12s are not advised to see this (a warning we suggest they heed unless they have become inured to bodies being mutilated and flung about with gusto) and some of the humour is decidedly scatological. As well as the occasional farts and upskirt action, our hero has an interesting interlude on the lav with a bright red frog (not sure you can pin that one on Poe). There is a salutory flash of stage magic towards the end as Fred and his wife are finally re-united underwater amidst bubbles and swimming fish - it's both touching and gorgeous.

The Catalyst Theatre's Nevermore and Punchdrunk's Masque Of The Red Death were both excellent takes on Poe's life and works respectively; perhaps the curse of Poe is how his name is attached to projects which have only a casual affinity to his works. Hardcore Poe fans will enjoy spotting the less obvious references and should find dark solace in the fact that the Gothfather can still make the kids scream over 150 years after his death.

Watch this space for more coverage of the London International Mime Festival which continues until the end of the month with productions at the Southbank, the ICA, the Roundhouse, the Royal Opera House and the Barbican.  See here for more festival information including ticket availability and prices.