Pull Your Own Pints At The Thirsty Bear 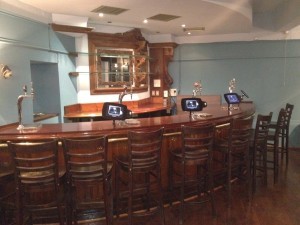 You build your own furniture because it makes it cheaper. Before you head to the airport, you check in online because it’s faster. When you go to the supermarket you scan your own shopping because you like arguing with electronic women who think you’ve bagged double the weight you ought to

With the opening yesterday evening of The Thirsty Bear at Waterloo, self-service has come to the service industry, with London’s first pull-your-own-pint pub.

The venue, which replaces the old man friendly Stamford Arms, is the first venture by the appropriately named Robot Pub Group, and though we’ve been made aware of this place in Manchester which uses a similar concept, it’s a brand new one to us.

Each table is fitted with a mounted iPad and several beer taps. On entering the pub, you start a tab and are given a swipe-card to activate the iPad and taps. Your bill is automatically collated depending on what you drink, measured to the 0.1 of a pint.

It’s understandably not feasible to have a tap of each beer on every table, so most have just two. However, by logging out of the system and relocating table, you’re able to take your pick of everything on offer. So long as whoever’s sitting on the other table doesn’t mind, of course. 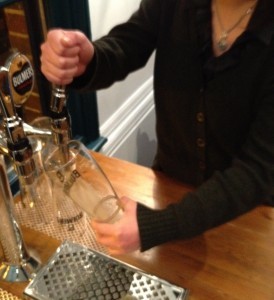 There’s no escaping the fact that it’s a novelty, but it’s a fun one. And anyone who’s ever queued up for 25 minutes to buy a round of drinks on a Friday night will understand the potential usefulness of having your beer already at the table. The iPads also allow you to order bottled beers, wine, cocktails and food without leaving your seat. And should you need some entertainment, you can play a track from the online jukebox for 20p. Games are apparently on the horizon, too.

Now, for all the reasons listed above, we really, really want to love this place. But we do have a problem - the drinks on offer. The fact there’s no ales on tap is understandable, given the skill involved in pouring a decent pint, and the difficulty of hooking a pump system up to the iPad electronics. However, we do think they could go a bit better than Amstel, Magners and Aspall. Belgian lagers, for example, or a quality product like Meantime, and some less usual ciders. Even the bottled beers at the bar are run-of-the-mill.

We’d like to see The Thirsty Bear attract a discerning, beer-loving crowd who are as inexplicably excited about pouring their own beer as we were, but if the juice on offer doesn’t meet expectations then it’s likely to be a one-off visit. Still, it’s early days and there’s glitches to overcome, so perhaps it’s wise to start small. We’ll certainly be back to check on the progress soon. We’d just love a bit more variety on tap, please Thirsty Bear folk. Then you could become one of our favourite pubs in London...

The Thirsty Bear is at 62 Stamford Street, SE1 9LX, ‘behind’ the Southbank close to Waterloo station. Petition them for more drinks on Twitter @TheThirstyBear.