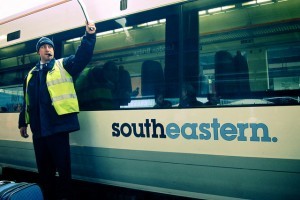 Southeastern seems to be increasingly adopting a new way of getting its trains to run on time — by not stopping at stations.

Our "favourite" train operating company (see previous posts on epically reduced snow timetables and spectacular communications failures) has been sparking Twitter rage at certain stations in the last few days as trains sail blithely through without warning. At your correspondent's home station Hither Green, commuters were stunned to see the 0837 not stopping on Tuesday, and this Londonista watched in disbelief as yesterday's 0850 chugged into the distance.

In what is becoming typical of Southeastern's communications, there were no indications of alterations to services on electronic boards and station staff were as much in the dark as passengers. We've since heard of trains skipping Lee, and a couple of trains yesterday evening started from Charing Cross with fewer stops than timetabled (though to be fair, we've seen a photo of at least one destination board showing the truncated journey).

So what's causing this rash of last-minute alterations? As far as we can make out: punctuality. The Southeastern press office got back to us about Tuesday's 0837:

[The train] started late (8 minutes) at Orpington... On the occasions such as this, to help get the train back onto its timetable and prevent the delays from growing and growing (because ultimately that 8 minute late start would grow and grow as it missed its scheduled times through complicated junctions such as London Bridge and making its next service even more delayed etc etc), the decision is made to not stop at certain stations... before Hither Green it did not stop at Petts Wood, Chiselhurst and Elmstead Woods.

For the sake of eight minutes, passengers at four stations were left standing (though rumours the train passed a red signal are not true). We know Southeastern have decided to skip stations during the Olympics to keep the timetable, but are surprised to see them applying the principle across the network eight months early. Cynics may wonder if they're worried about missing punctuality targets and having to offer season ticket refunds, but their average yearly figures are actually looking OK.

Missed stations also mean other trains are more full, contributing to another reason for skipping stations. "Large passenger flow" was the reason given for cancelling two trains yesterday. One question: how exactly are these trains and stations supposed to become empty?

Despite new technology being installed to allow the control room to make announcements at stations (not yet functional), this latest fiasco isn't filling commuters with confidence that the next snowfall will be any better than the previous few — either in terms of trains actually running, or finding out about them.

We've also heard about South West Trains not calling at stations this week. Their press office say such an event would always be announced at stations and on displays — but that's what Southeastern said. Anyone know any different?

Photo by andrew off-road from the Londonist Flickr pool