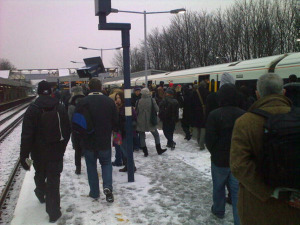 Photo reportage by Tom Royal
And the award for biggest overreaction to the forecast snowpocalypse goes to: Southeastern Trains. We told you yesterday that they were planning to run a revised service, but what nobody knew until this morning was that would involve just two trains an hour on each Metro route and that at 8.36pm a large "Gone Home" sign would be hung on the doors of Charing Cross. That's right: South East London is, in effect, cut off this evening.

It's no wonder SE Londoners are apoplectic with rage. We spotted tales of constantly full trains from Hither Green and Blackheath this morning - for some poor souls who absolutely had to get into work, there was nothing for it but to try other means of transport or just walk. It would be understandable if we were under the fabled 40cm of snow but, looking outside our Lewisham window, we can report there's not enough snow on the ground to cover the tops of a pair of very flimsy shoes with a tiny fluttering of flakes drifting from the sky. To compound the ludicrousness, Londonist caught the 23.44 train out of London Bridge last night, when the snow was bucketing down, without any problems at all.

We've left messages for Southeastern, asking how long this is planned to continue and whether they'll be offering any sort of compensation, and will update this post when/if we hear anything. In the meantime it seems there's little to do but fume silently (or loudly, whichever is your wont) and contemplate secession from the rest of the capital.

Update 7 January: We've had word from Southeastern - read the full statement after the jump.

"The decision to run a revised timetable was made based on the advice from Network Rail, who has responsibility for the track and they decide what service we will be able to provide.

They were out overnight with de-icing trains and we also ran ghost trains around the entire network, not just in London.

To ensure that we were able to provide a reliable service throughout the entire day and have the right staff and rolling stock in place for the evening peak, when the worst of the snow and ice hit London, we needed to run the revised timetable from the morning, as it would have been almost impossible to implement at the last minute for the afternoon. Our trains also come into London from across Kent where they will, of course, also be subject to the snow and icy conditions found there.

We told passengers at the earliest possible moment on Tuesday of the revised timetable through texts, emails, station notices, onboard announcements, station announcements and providing extra staff at stations, as well as advising the media of the plans.

The revised timetable remains in place for today (Thursday) and tomorrow (Friday) and we are asking passengers to check with National Rail Enquiries for services and to check when their last train home tonight will be."

We think it's fair to say this statement doesn't deal with the many questions commuters have. Greenwich and Woolwich MP Nick Raynsford is trying to get some answers out of Southeastern, citing normal running of the Jubilee line and DLR, and we wish him luck in his quest.