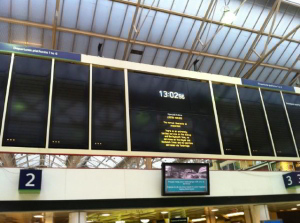 Oh, Southeastern Trains. They make it so hard for people to love them. After January's debacle where they were the only London Train Operating Company to not even try to run a service past about 8.30pm, and had the Mayor and the London Assembly censuring them, not to mention every commuter in south-east London making little voodoo dolls, they said they'd do their very best next time.

Their "winter preparations" included creating a little service update tool for their website, much like TfL have for the tube. Drivers have been given Blackberrys to keep them in touch with Control and, apparently, "customers can get updates on Twitter and sign up for dedicated email alerts tailored to their individual journeys".

Which sounds great. Until the plans were put into action yesterday as the snow started to fall. And complaints started flooding onto the internet that there was nobody at stations to say what was going on.

"Charing cross update. If you ask at the desk they will tell you which trains are running. No PA announcements as only 1 person upstairs"

853 and Blackheath Bugle noted that departure boards at stations were turned off again, and Kidbrooke Kite says you're better off getting information from the guy running the coffee stand than station staff.

@alexgnuk got some information, but it wasn't much use:

"They told us to get on the next train for London Bridge. We did. And where is the next stop? That's right, SEVENOAKS!"

"Crazy, total lack of communication between the platforms at London bridge."

Stations were overcrowded and eventually closed. A train broke down at Sevenoaks with passengers waiting in darkness until 3.30am, when they walked half a mile to a station staff room. To wait some more.

But unlike January, we can see there is a lot of snow on the ground (our scientific measurement: about halfway up a cat's leg). In the words of @RachelLK:

"It's not so much the actual train delays I mind, it's the total lack of information."

So what of these train driver Blackberrys? According to @Train_Driver, it's receiving lots of messages about "disruption level 2", which is, er, uninformative. The emails? @louboutinzoe has one:

But surely, Southeastern said we could get updates on Twitter? Not if they meant the official @NRE_Southeastrn account, which this morning tells passengers to call the recorded information line. Or perhaps they meant "you can get updates if you follow people who live near you" - crowdsourcing win?

Yes, the service this morning may still be appalling - thank you, @Bobajobbob

"To confirm, I've waited here for 30 mins and there are NO trains at #sevenoaks this morning. Do not believe website."

"Reports that trains so crowded, waiting passengers are pulling people off the train to get on."

- but today, perhaps the real story is that the only reliable source of information coming out of Southeastern is one lone staff member - the aforementioned @Train_Driver.

"Trains are fecked. Drivers been all been told to wait for instructions at dept. STAY AT HOME."

"Received email asking for volunteers for local stations. Maybe #southeastern should be employing more staff instead of cutting them."

"The frozen 3rd rails and points, which are the main problem are owned by#networkrail Doesn't excuse#southeastern lack of info though."

@Train_Driver, we salute you. And please hide your automatic login in case Southeastern managers do a search for Twitter clients on staff phones.

If you're relying on Southeastern today you should look at the emergency timetable (PDF), but take it with a pinch of salt, as it seems to think the Sidcup line goes through Greenwich. Some lines out of London finish as early as 8pm tonight, but there are trains planned up to midnight. As @darryl1974 points out

"Unbelieveable - #southeastern website claiming a half-hourly service, but a quick look at the live departure board shows this to be bollocks"

"Interesting to see that South West Train is maintaining close to scheduled service while Southern is in meltdown."

and a broken down train at Gatwick caused chaos this morning, but we can't detect the same outcry over service - Southern commuters, are you also left mystified at your local station, or have Southeastern passengers just reached breaking point?

Edit 1710: this just in from National Rail - all Southeastern servies will stop by 9pm tonight. Last train out of London Bridge leaves at 1940.