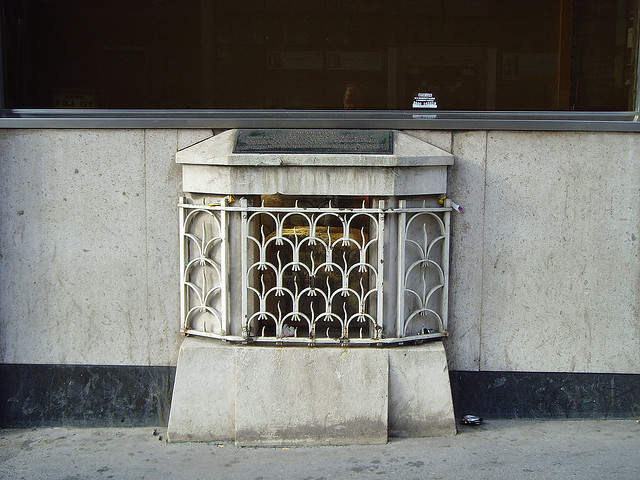 London Stone, one of the capital's oldest landmarks, might soon be relocated to a new home on Cannon Street, pending a planning consultation.

The hunk of rock is thought to have stood in the area since Roman times, and carries Grade II* listed status. It pops up in the historical record now and then – first noted in the 10th Century and visited by rebel Jack Cade six hundred years ago. Following a close shave in the Blitz, it has, since 1960, resided in an unremarkable niche in a lacklustre office block at 111 Cannon Street.

That pile is now set for demolition (possibly...we ran this same story five and a half years ago). Property company Minerva are keen to shift London Stone a few doors down to a specially built display case in the Walbrook Building – that heavily ribbed Foster structure opposite Cannon Street station. As Diamond Geezer points out (and we also thank him for alerting us), this is the latest of many local moves for the stone, which, along with its current dismal setting, probably explains why its proposed relocation by a corporate entity has raised little objection.

The future of London Stone's similarly venerable neighbour, the Temple of Mithras, remains in limbo following the demolition of Bucklersbury House. The Roman survivor was also due for relocation, back to its original site in Walbrook. But the site redevelopment has stalled and its future is uncertain.