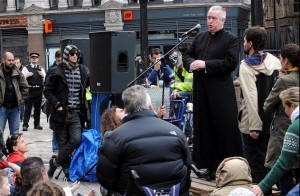 More developments at and away from St Paul's... the City of London Corporation will today hand OccupyLSX a letter giving them 48 hours to clear the camp before legal proceedings are started. If the protesters stay (which seems likely), that doesn't mean they'll be cleared at the weekend - High Court action is likely to drag on for weeks, possibly months. The Bishop of London has also just moved to disassociate the Church from these legal moves.

A third camp sprang up overnight near Tate Modern. It's certainly visible, but this location is even further away from the objects of the protest's complaints of financial sector unfairness and greed than St Paul's.

The Dean of St Paul's, Rt Rev Graeme Knowles, has followed Canon Giles Fraser and chaplain Fraser Dyer and resigned. His statement references the strain the cathedral has been under recently, and that mounting criticism in the press and public opinion had led to his position (as head of the cathedral's Chapter) becoming untenable. Reading between the lines we'd say he's taking responsibility for the fiasco of closing the cathedral. It's sad that the protest has brought the resignations of three clergy members, while bankers still demand their bonuses and prime ministers would rather risk Europe's economy than lose office. What would Jesus do indeed.

Meanwhile, over in the 'and the election is still six months away' corner, Ken Livingstone has attacked Boris Johnson's position on the protests, saying:

"City Hall has a duty to accommodate those who wish to protest in London and ensure their safety whilst ensuring the London does not grind to a halt. No one wants or expects there to be permanent camps – all protests have a beginning and an end – but the scale of the problems ordinary people are facing mean these international protests are inevitably not yet over."

We've also just stumbled across a report from a few days ago that Kit Malthouse - Deputy Mayor and chair of the Metropolitan Police Authority - seriously suggested installing high-powered sprinkler systems in public places to prevent protest encampments. Now there's a man who doesn't like tent cities.

Photo of former Dean Graeme Knowles by normko, from the Londonist Flickr pool