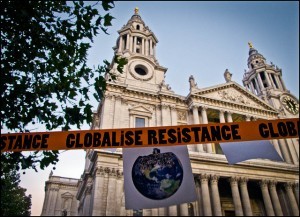 St Paul's will probably reopen tomorrow, following what the cathedral describes as "significant changes to the layout" of OccupyLSX's camp - but canon chancellor Giles Fraser has resigned.

St Paul's closed its doors last week citing "health and safety", though David Allen Green did a nice analysis for the New Statesman yesterday trying to find out the precise reasons (in a nutshell: St Paul's wouldn't give specifics and had stopped communicating with the camp, thereby making it impossible for protesters to change and - if there were genuine H&S issues rather than the whole thing being egregious bullshit - potentially endangering people by not sharing what the risks were).

The cathedral appears to have relaxed its line now - last night's statement mentions a number of changes made to the camp, including the kitchen being moved away from the building, moving bicycles and clearing a pathway, though it's not clear whether these are the changes that were made several days ago or if there were significant alterations yesterday. Final checks will be made tomorrow to see whether the doors can be flung open again (note: the galleries and dome will still be closed. Why, anyone?).

This morning, Giles Fraser handed in his notice with what he described on Twitter as "great sadness and regret". He then went on to tell the Guardian:

"I resigned because I believe that the chapter has set on a course of action that could mean there will be violence in the name of the church."

He's presumably referring to signs that authorities are getting ready to evict protesters. The cathedral's own statement contains an excellent piece of doublethink:

"We reiterate our basic belief in the right to protest as well as requesting that those people living in the tents now leave the site peacefully."

The City of London corporation is deciding whether to have the camp evicted, a position which has the backing of Boris Johnson. Remembering what happened last time police tried to clear a protest camp in the City (2009's Climate Camp in Bishopsgate), Dr Fraser may feel his concerns are justified.

St Paul's appears to have got itself into a real mess: closing then opening, welcoming the camp then refusing to talk to it, apparently so riven with internal strife that the senior member with responsibility for contemporary ethics feels no option but to resign - they didn't ask for OccupyLSX on their doorstep, but the response has been bloody awful.

Photo by Sven Loach from the Londonist Flickr pool