Welcome To London, Sponsored By [Your Company Here] 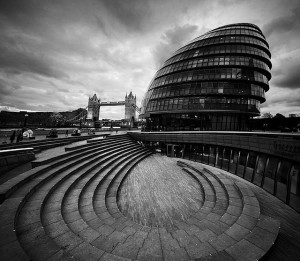 Boris Johnson is reported to be planning a major sponsorship push for all City Hall initiatives, despite current accusations that he got a bad deal out of Barclays for the cycle hire scheme.

"We're looking at getting sponsorship for everything that we spend money on at City Hall to reduce the amount coming from the public purse. We could bring in more money by giving ownership of, say, the sustainability programme to a company. So every time Boris talks about sustainability he says, for instance, that it is in partnership with BP and Shell."

Really? The same Shell that reduced its investment in renewable energy and the same BP whose sustainability can be seen all over the Gulf of Mexico? That's where their thinking is? Did someone at City Hall read The Scoop's April Fool post and think it was a genuine policy suggestion?

Even without thoughts of subvertising and inappropriate branding (McDonald's for the Mayoral anti-obesity drive, anyone?) there are doubts whether Johnson will even get a good deal.

BBC London ran a very hacked off piece last week, accusing Boris Johnson of giving Barclays the bike hire sponsorship "on the cheap". After receiving two unsatisfactory bids, apparently the Mayor went straight to Barclays - and only Barclays - offering them a bunch of sweeteners (e.g. naming rights over the bikes and cycle superhighways).

The BBC contacted a brand strategist who worked out that, for their £5m a year deal, Barclays are getting about £9m-15m a year's worth of advertising. Even to us, last year, it looked like the bank was getting a lot in return for their cash. Seems we were right.

While sponsorship may be necessary to fund the (white elephant?) of the Thames cable car to stop it raiding the taxpayer's purse, is corporate sponsorship for basic elements of running London what we want? Isn't the point of the state to be above corporate influence? And given how much Barclays got out of their deal, we're not convinced by Ritterband's assurances that we won't be drowning in corporate branding.