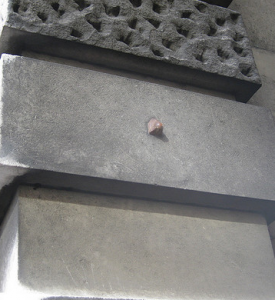 Legend has it that the Household Cavalry touch this strange protrusion every time they pass through the arch, as a mark of respect to the Iron Duke. In fact, it's one of several prosthetic noses placed around London by artist Rick Buckley and only dates back a decade or so.

There's a gas lamp on Carting Lane, off the Strand, powered by sewerage gas from the Savoy

There is indeed a curious lamp at the lower end of Carting Lane. However, it is not quite correct to say that it's powered by sewer gas. The Webb Patent Sewer Gas Lamp, of which this is the only example left in London, was chiefly fueled by the mains supply of gas. However, a flue from the sewers did draw up waste gases for combustion along with the mains gas. The existing lamp on 'Farting Lane' is a replica.

We've dealt with this one ad nauseam. In short, it's not. Since 2012 it has officially been called the Elizabeth Tower, and was previously called the Clock Tower. It was never officially called St Stephen's Tower, but this name seems to have gained some currency. We reckon Big Ben should be acceptable as it's by far the commonest label people use for the tower, even though it more properly refers to the bell (actually 'a' bell — there are five in there). Big Ben has gained a kind of authority by way of overwhelming popular usage, much as it angers pedants when people use it. More here.

The Union Flag flying from Buckingham Palace means the Queen is at home.

Actually, it means the opposite. You're looking for the Royal Standard if you want confirmation of the Queen's residancy. The Union Flag above the Palace means she's elsewhere, doing other Queenish things.

This factlet remains popular as it plays into stereotypes of wide-eyed Yanks with no sense of history. But there are several problems with the idea. It's true that the predecessor to the current London Bridge was bought by US businessman Robert P McCulloch and transplanted to Lake Havasu City in Arizona, where it can still be seen today. However, it wasn't 'Old' London Bridge, a term usually reserved for the medieval span, which was demolished in the 1830s to make way for the John Rennie structure eventually purchased by McCulloch. There's also no evidence that he mistook his acquisition for Tower Bridge, a rumour that the American always denied (although most people would, to be fair).

This urban myth is only hours old, but looks set to gain currency. The figure is based on a blog post by Diamond Geezer from three years ago. Researchers from the TV show QI tweeted the 'fact' to their 131,000 followers. Diamond Geezer has followed up with a new post explaining how the original number is blanketed in caveats and certainly not definitive. It'll be interesting to see if this one grows.

It's true that the Strand entrance to the Savoy has reversed driving directions. It's not the only place in the UK, though. We give you Hammersmith bus station, whose entrance and exit both force drivers to the right. All very confusing for pedestrians.

The Viaduct Tavern contains old cells from Newgate prison (or Giltspur Street Compter) in its basement.

Not so, according to Peter Berthoud, who reckons the famous 'secret London' mainstay is just a cellar.

There are no roads in the City of London

Traditionally, this was the case. Plenty of Streets, Alleys and Squares, but no Roads. Since boundary changes in 1994, however, the eastern half of Goswell Road sits within the City. Technically, though, you can still say there's not a single road in the Square Mile, as it only counts as a half road. More here.

Further spurious facts are welcomed in the comments. As is the inevitable remark spotting an error in our post.

This article has now been worked up into a book, with dozens of further examples.