Happy Birthday To The Boris Bike 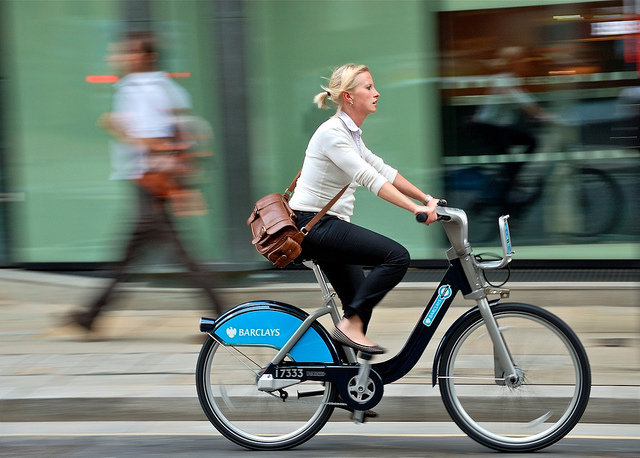 A year ago tomorrow (30 July) the Boris bike was launched onto an unsuspecting city. To mark the occasion, Transport for London has prepared a birthday gateau of facts and announced a westward expansion and an additional £25 million in sponsorship money from Barclays.

One year on, the bikes have become part of the fabric of London life, and it's hard to recall now the doom-laden prognostications that accompanied the launch last year: the predictions laid out by many sceptics, that the scheme would succumb to theft, vandalism and lardy Londoners' lack of interest, have been handily disproved. In fact, they're a hit, with over 6 million journeys to date, and they have captured the public imagination, spawning wacky challenges and mesmerising data visualisations. The robust cycles have remained resolutely un-pinched and un-vandalised: only 200 of the 6,000 bikes have had to be scrapped. And there have been no serious injuries reported by people riding them.

Yet the question remains: what (if anything) has the system actually done for transport in the capital?

Cycle hire was the most conspicuous tranche of Boris Johnson's "cycling revolution". The guided rides (remember them?) were a short-lived failure, and the Cycle Superhighways have been slow to emerge and beset by a perceived lack of effectiveness. The Boris bikes, on the other hand, had an immediate impact, quickly becoming a visible presence on the capital's roads and cycle paths. The planned roll out to casual users was delayed by several months, and at times the system has struggled to cope on both a technical level and with the heavily skewed movement patterns (the surge away from and toward mainline stations at rush hour), meaning that a supposedly green mode of transport requires large trucks to redistribute the bikes and keep the system ticking over.

There are also concerns about the level of sponsorship that Barclays have got for their money. The BBC yesterday accused Boris Johnson of accepting a "cheap deal" from the bank, which has put in around 10% of the scheme's cost, at £5 million for two five-year stretches, yet advertising excecutives contacted by the BBC estimated the commercial value of the sponsorship at between £9 million and £15 million. The scheme itself is expected to lose £10 million in its first year, and is unlikely to break even any time soon. The Barclays logos emblazoned across each cycle have, inevitably, been the subject of subvertising attacks.

We asked people on Facebook for their impressions of how the scheme had fared in its first year, and got a good number of interesting responses:

- For the most part, people are happy with the scheme: "a great way to see London", "an easy, healthy and cheap way to get around", and the cycles themselves are "much better than the bikes in Paris."

- The "appalling technical backend" is still "utterly rubbish" and prone to regular failure, particularly for casual users, although members are also having trouble. The story of someone "still owed £11" due to being wrongly overcharged is not an isolated case.

- There's not much love for the support hotline: "[they] tell you 'customer services' will ring you back. 'Wait,' I said once. 'If you're not customer services, who are you?' 'Oh, we're just the hotline.' Right."

- There are concerns about the riding technique employed by the few "idiots [who] give the rest of us a bad name", though the suggestion that unsure cyclists should be made to "do a cycling education lesson of some description" probably won't win much favour

- The pricing structure seems fair: being "free for the first half hour" is generally seen as an acceptable fare.

- Safety is a concern. Some are in favour of dedicated bike lanes: "Mixing bikes with road traffic is still wrong, dedicated segregated cycle lanes would encourage more use from less courageous users". There are also suggestions that riders should be forced to wear helmets, something that road safety charity Brake has also endorsed. Yet cycle hire scheme in Melbourne, Australia, was a flop, largely because the law requires all cyclists to wear helmets.

- Finally the scheme inspired at least one of our correspondents to go out and buy a bike.

That last point is key in understanding what, in the long term, cycle hire will mean for transport in London. No matter how wide the scheme is extended, it will only ever represent a small percentage of journeys made. Yet if it acts as a taster for cycling in the city, and gives commuters the impetus to go out and buy their own bike – and anecdotally, this does seem to be happening – then it could have real value into shaping London into a more cyclist-friendly city. If you're looking to take the plunge, our guide on how to start cycling in London might help.

Though the suggestion that "it should be the law that every able bodied Londoner must own a bike" is unlikely to go before Parliament soon, the Boris bikes have had a relatively successful first year in which, at the very least, they've helped make the subject of cycling in the city into part of the cultural conversation.