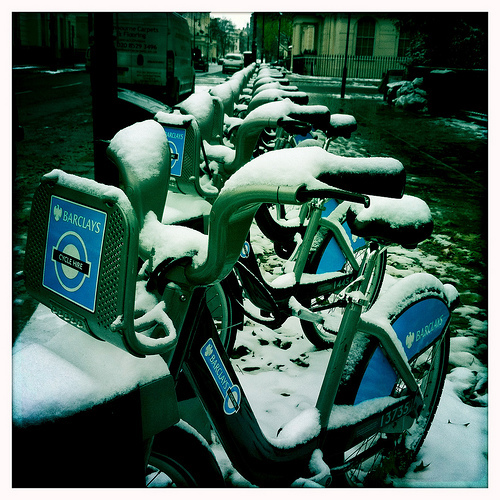 Update: As one of our commenters alluded to, a "system error" this morning affected a number of docking stations, where neither registered nor casual users able to rent the bikes (although users with annual or a pre-existing access period were apparently okay).  Around 100 of the 352 stations were affected, and Serco, who administer the scheme, have sent out engineers to fix the problem.

A teething problem, perhaps, but one that looks particularly bad coming on the day the bikes were extended to non-registered members, and it still doesn't explain why the call centre employee we spoke to (and his superior) had no idea what was going on.

Original post: TfL couldn't have picked a chillier morning to roll out the Cycle Hire scheme to non-members. Unfortunately, anybody who'd planned to rent one out using a credit card may have been left disappointed, if our experience was anything to go by.

Rolling on up to a docking station in Whitechapel shortly after the 10am launch time, we pressed the new 'Hire a cycle' button on the touchscreen, and after glancing through the two-page 'Privacy Notice' put in a credit card (specifically a Barclaycard, just to be on the safe side) as instructed so that the system could check we hadn't already hired a bike out.

After a few seconds, an 'Information for Casual Users' notice appeared, then a question about the usage period required (24 hours for a quid, one week for a fiver, same as membership prices), and finally, a question about how many bikes: it seems you can rent up to four bikes per card, which is handy for families or small groups who may wish to cycle together. Finally,  upon confirming the process, we put the credit card in again and entered the PIN number. After a wait of about three minutes, during which "Processing request" appeared on the screen, the following message appeared: "Sorry, your request cannot be processed". No reason why, only the standard Cycle Hire helpline number.

Gallery: Our experience of using the scheme.

We tried again, on a different docking station, using a different credit card. This time the system threw up the same error messaage the first time the card was entered. A phone call to the call centre wasn't much help: the operator first told us that both cards had already been registered under the membership scheme (untrue), then suggested that it might be because the system couldn't handle two credit cards from the same address, before backtracking on that point. At this stage we gave up, frostbitten of  finger and bereft of bike.

We'll try again over the weekend, but this was a pretty dispiriting experience overall, and judging by the complexity and number of informational screens that have to be navigated before a bike is (presumably) released, it seems needlessly more complex than the simple key system that members use. Has anybody else had more luck?