BusMapper. It Maps Buses. But In A Useful Way.

By M@ Last edited 135 months ago
M@ BusMapper. It Maps Buses. But In A Useful Way.

Buses and maps. It's a nerd's wet dream. But BusMapper has such an easy interface it might just appeal to everyday commuters.

Simply click your start and end points on a Google Map, and the site overlays the best routes. You can then drag and drop either terminus to try alternative journeys.

Let's say, for example, that Boris Johnson wanted to travel from City Hall to visit his sister at The Lady in Covent Garden. Someone's stolen his bike, there's a Tube strike on, and all the hire bikes are taken. Which bus should he take? 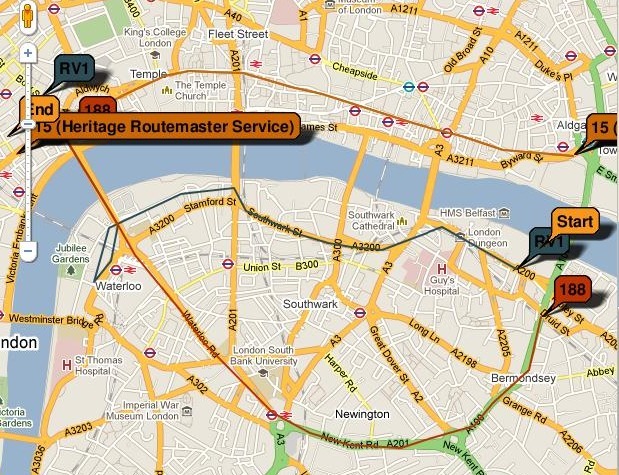 A quick fiddle with the map offers three options. The 188 takes him almost door to door, but detours on an apparent gravitational slingshot around the Elephant and Castle. The oddly named RV1 route (it stands for 'riverside') runs right past City Hall on Tooley Street, and would offer the mayor a pleasant stroll across Waterloo Bridge after it terminates at the cognate station. His third choice involves transponting Tower Bridge on foot then catching the number 15 on the Routemaster Heritage Route all the way to Strand.

What should our tousled-haired mayor do?

Cheers to @zefrog for the tip.