Another Night Of Council Cuts 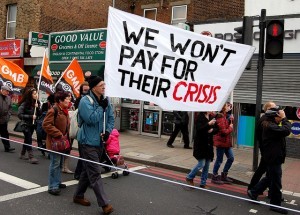 Enfield
The Labour council of Enfield will cut £34.5 million over the next year, frontloading a three-year plan to pull back £57 million. 200 jobs will go, with some cuts to library budgets and other public services. At Enfield town hall, police reportedly closed the upstairs gallery saying it would be 'unsafe for large numbers of people'.

Greenwich
The soon-to-be-Royal borough agreed to £36.7 million savings over the next year, part of £63 million over the next four. According to the BBC, it is unclear how many jobs will go, but about a third of the savings would come from salaries. Daryl from 853 blog attended the meeting and notes that the budget was passed 'without a murmur of protest'.

Hackney
The Labour-led council approved £44 million of loppage over the next year, part of an £80 million programme over four years. Around 200 jobs will go, but councillors insist that front-line services will not be greatly affected. Nevertheless, this meeting saw the night's most vociferous protests. An estimated 300 demonstrators surrounded the town hall, and heckling from the public gallery caused a temporary suspension of the meeting.

Royal Borough Of Kensington & Chelsea
The regal title doesn't grant any fiscal privileges. K&C voted in a £23 million cut to its 2011-2012 budget, and £40 million over the next three years. Some 150 jobs will go, with reductions in services for the environment, leisure, children and adult social care, prompting protest at last night's meeting.

Westminster
The Toryfied city council are looking at £60 million over two years. Half of that will come from 450 job losses. Building costs and 'back-office functions' account for some of the remainder, but the chop will also affect grants to the voluntary sector and public services.

Please let us know of any additional blog posts or news reports about any of these meetings, and we'll add links.

26 of London's 33 councils have now voted on their budget plans.

We've mapped out how the cuts affect each borough.

For those who wish to protest against the cuts, the huge 'March For The Alternative' demonstration will take place in London on 26 March.