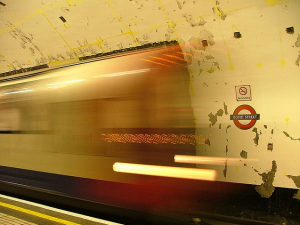 Boris Johnson has again invoked the prospect of driverless Tube trains as a way of permanently beating the strikes.

The idea first surfaced last summer, when a group of Conservatives on the London Assembly leaked a document that proposed binning off drivers and hence ridding TfL of strike action and a hefty wage bill in one fell swoop. As last night's Government of London address, Boris Johnson brought the subject up once again, noting that much of the Jubilee line is already under automatic train operation (ATO) between Stratford and Neasden. He could also have mentioned the Victoria and Central line, which operate under a similar system.

The idea seems attractive in principle, but Boris appears to have been led to the conclusion that ATO means the driver can easily be dispensed with. A full explanation of the system is available here, but in short, the driver presses a button to start the train from a station, and controls the doors. However, they are also capable, in the event of system failure, of manually driving the train. Even the DLR, which could be more accurately described as 'driverless', has a member of staff on board, capable of taking control if necessary.

Boris' timing here suggests a new approach to the unions. Earlier this week he released a video message to warn Aslef members about a non-existent strike over the Royal Wedding. His speech last night came 24 hours ahead of another strike on the Bakerloo and Northern lines. Wary of Ken Livingstone's chance to turn Boris' apparent mishandling of the Underground into a key election issue next year, the Mayor appears to be doing everything he can to seize the initiative. Cooking up harebrained schemes to pull one over on the unions should play well among commuter circles, but don't expect to see your Tube train rolling into the platform with an empty driver's cab anytime soon.