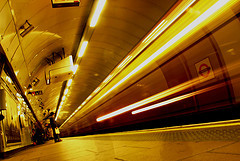 Photo / WillStover
The Conservatives on the London Assembly have set a cat amongst the Crow(s) by proposing a driverless Tube service.

The proposal comes via a leaked memo (PDF), which has fallen on the desktop of Boris Johnson. It claims that the plan would save TfL £141m a year in wages, and — happily enough — "end the strangle-hold militant unions have on the city's tube network and seriously curtail their ability to bring London to a standstill".

The RMT has given the idea short shrift. A press release from the union describes it as a "lethal and ill-conceived plan to sack all tube drivers", and said that any serious consideration of the move would be met by "all-out industrial action". They've demanded direct assurances from Boris Johnson that the plan is not on the cards. TfL have released a statement in defence of their drivers, saying they "reassure passengers, provide information and help with speedy alighting"; hardly a ringing endorsement for job security.

Driverless trains have been in operation in London since the Docklands LIght Railway launched over twenty years ago, while Victoria line and Central line drivers control the door mechanism and make on-board announcements, but don't control the train itself, facts which somewhat mitigate the RMT's argument about safety.

However, the DLR operates a system known as 'Driverless Train Operation', with a member of staff present on each train, who may be called upon to take control in certain situations. The Tories' plan calls for 'Unattended Train Operation', meaning that there would be no official on-board presence. Would commuters fancy waiting indefinitely for a driver to edge his or her way along the tunnel should something break down?