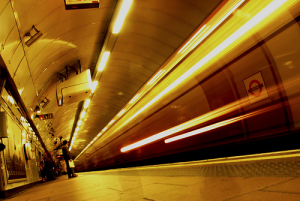 The runaway engineering train that careened along the Northern line in the early hours of August 13th was the result of faulty equipment and basic human error, an internal report by TfL has concluded.

The rail grinding unit had broken down and was being towed northbound by an out-of-service passenger train at around 6.30am, roughly the time that services were due to begin. However, whilst heading up the gradient toward Archway station, the lead train exceeded the recommended speed limit (5mph) for such an operation. This put further pressure on the coupler, which then broke, severing the connection between the trains.

The brakes on the engineering train had been isolated to allow it to be towed, so once it was no longer connected to the leading train, gravity took its course: the train began rolling backwards, picking up speed as it went. At one point it was reportedly within 500m of a southbound Northern line train, which was forced to rush through several stations as the driver urged passengers to move to the front of the carriage. Line controllers performed admirably, scrambling other trains out of the way before the unit rolled to a halt near Warren Street station.

The BBC's Tom Edwards has taken a detailed look at TfL's report, which reveals that the unit hit a top speed of 32mph as it whistled through Kentish Town station. The report also notes that there was "significant pressure" to commence the Northern line service on time, which may have led to the normal safety precautions being circumvented. The Tube unions might be very interested in that.

A secondary report into the incident by the Rail Accident Investigation Board is due next year.