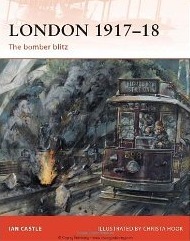 Night-time raids from German bombers, hundreds of thousands of people sheltering in Tube stations, the streets of London blacked out while search lights comb the skies...the familiar horrors of the Blitz. A new book by Ian Castle reveals how it all happened long before the terrible onslaught of 1940-41. The Bomber Blitz looks at an almost forgotten chapter in our city's history, when the Kaiser's primitive aircraft attempted to put London to flame during the First World War.In a previous book, Castle described the Zeppelin attacks on London - incredibly, the first time a foreign and hostile armed force had reached the capital in 850 years. After our nascent air force gained the upper hand, the giant blimps were withdrawn in favour of 'Gotha' bombers, and it is their tale which is told in this book.The aerial bombardment, while much smaller than that of 25 years later, claimed almost 500 lives in London, caused thousands of injuries and resulted in millions of pounds worth of damage. Individual incidents were as horrific as anything from the Second World War. Sixteen children were killed at a school in Poplar, after a bomb landed in their classroom; a strike on Long Acre claimed 38 lives; 18 people were killed when, in the final raid of the war, a bomb demolished houses on Sydenham Road. Towards the end, the Germans sent over 'Giants', huge biplanes with much greater wingspans than any air craft from the Second World War, capable of carrying devastating 1000Kg bombs.The story is told with pace and accuracy by Castle, in the authoritative but readable tones you'd expect from an Osprey title. Carefully assembled maps show the locations of many of the strikes, while double-page illustrations by Christa Hook bring home some of the horrors experienced by the population.The Bomber Blitz may be largely forgotten by most Londoners, but its signs can still be seen around town. Next time you're passing Cleopatra's Needle, look out for the shrapnel marks on its base, and that of the right-hand sphinx. The tragic tale of this particular blast is one of many in the book that collectively essay why 'the other Blitz' deserves to be remembered.London 1917-18: The Bomber Blitz by Ian Castle is out now from Osprey.See also: Our map of Zeppelin raids on London.