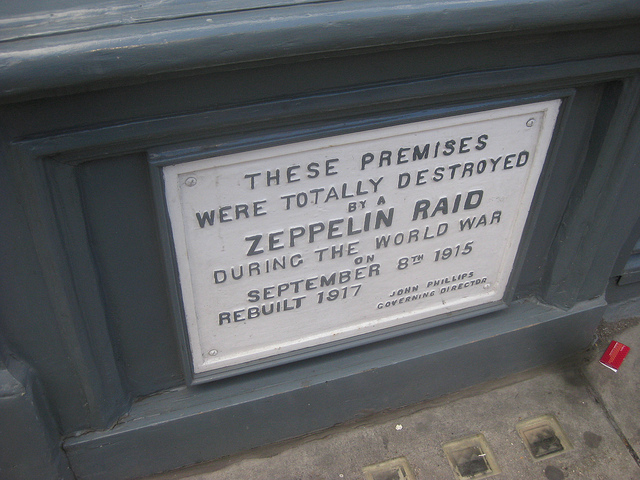 A plaque on Farringdon Road marks the site of one Zeppelin attack.

A quarter of a century before the Blitz, London was terrorised by another aerial menace: gigantic airships, or Zeppelins, larger than an upended Gherkin building.

From 1915-1917, German airships unleashed hundreds of explosives and incendiaries on London. These first ever air raids on the city are now largely forgotten in the popular imagination, perhaps because of the much greater damage and death toll from the Second World War. But for Londoners of the time, the attacks were unprecedented, unexpected and lethal.

Around 200 people lost their lives in these night raids, and millions of pounds of damage was inflicted on the capital (not to mention the losses in coastal towns, which also suffered greatly). The first attack came on 31 May 1915. Number 16 Alkham Road in Stoke Newington carries the unenviable distinction of sustaining London's first ever aerial bomb damage. No one was seriously injured. From there, however, the airship looped south over Hackney and round past Stratford, killing seven and injuring 35. The population and emergency services were caught by surprise in what must rank as one of the most terrifying nights in our city's history.


View Zeppelins over London in a larger map

Notes on map: Rough flight paths are shown as coloured lines, with separate craft from the same evening shown in the same colour. Only a small selection of impact sites are shown. For the full details, see the Sources section below.

Further attacks followed. The airships flew at such a height that the ponderous air force fighters of the time were often unable to climb to the defence. Even when British pilots could engage with the enemy, the airships proved remarkably resilient to gunfire. When, finally, tactical and technical advances allowed British planes to engage, the Zeppelin crews stood no chance. Without parachutes, they were faced with the terrible decision of death by fire or fall. The airship threat soon disappeared after a number of missions were gunned down. The final attack came on 19 October 1917. Flying higher than normal, the craft once again took the capital by surprise, killing 33 people.

Today, little evidence remains of these first ever aerial assaults on London. Three plaques mark sites of explosions (see map) and shrapnel marks can be found here and there. Perhaps the most poignant memory is the old clock in the Dolphin pub (Red Lion Street), whose hands remain fixed at the hour of the blast which partly demolished the bar.

The map above is based largely on public data presented in the excellent Osprey book London 1914-17: The Zeppelin Menace, by Ian Castle. For anyone interested in discovering more about the attacks, this book meticulously plots almost every incident based on government records at the National Record Office. The map above takes the rough routes of the attacking craft and plots only a selection of the impact sites. You really need to get hold of the book to find out more. Another good account is given in First Blitz, by Neil Hanson, which also goes on to describe the follow-on attacks from the first heavy bombers. And a note for pedants: although German airships were (and still are) popularly known as Zeppelins, this is a trade name. Other 'brands' of airship also saw service.

Liked this? See also our map of V2 rocket impact sites from World War Two. On more peaceful terms, see our photos from an airship ride over the capital.