Planes In "Near Miss" Over London 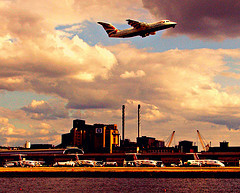 Photo / O.F.E.
A report by the Air Accidents Investigation Branch has described a near miss between a private jet and a Turkish Airlines Boeing 777 earlier this year as a "serious incident".

The two planes were flying over Hackney on July 27th when they came within less than 200 feet of each other, after the smaller aircraft misunderstood instructions from air traffic control at London City, and climbed to 4,000ft instead of 3,000ft. To compound matters, the Turkish Airlines crew didn't respond to a series of on-board collision avoidance warnings (known as TCAS II), a system the private jet didn't even possess. The smaller plane was able to take evasive action once they saw the commercial aircraft, yet had visibility been poor, there was a good chance the two planes would have collided.

The area over Hackney, in which the Heathrow flightpath crosses the one for planes flying out of London City, has been described as a "blackspot" by the Civil Aviation Authority, and the National Air Traffic Service has changed its communication methods for pilots departing the smaller airport. Yet in the same week in which Tony Blair revealed that he almost ordered a London-bound plane shot down on 9/11, it's a sobering reminder of how precarious aviation safety can be when you live in a city that lies beneath the most congested airways in the world.