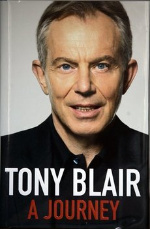 Those who were in London on 11 September 2001 may recall the wild speculation flying around about potential attacks on our own city. Several hijacked planes were heading for London, the whole of Canary Wharf was being evacuated...anything might happen. Fortunately, we were hit by nothing more than rumour. But a new revelation from Tony Blair's memoirs reveals how close we came to accidental tragedy.

In the immediate aftermath of the attacks on America, restrictions were placed on UK airspace. But there was a rogue aircraft in the sky and Tony had his finger on the button...

A passenger jet had been out of contact for some time and was heading over London. I had the senior RAF commander authorised to get my decision. The fighter jet was airborne. For several anxious minutes we talked, trying desperately to get an instinct as to whether this was threat or mishap. The deadline came. I decided we should hold back.

Correct decision, as it turned out. Moments later, the passenger jet regained contact and confirmed a coms fault. "I needed to sit down and thank God for that one!," says Blair. It's a grim reminder that, even in this age of checks, balances, facts and procedure, things can still get so screwed up that a leader must stake hundreds of lives on nothing more than instinct.