Patrick Hamilton's Hangover Square might be fictional, but London certainly has its fair share of addresses you perhaps wouldn't want to live at.

Does it become Erect Street, when stimulated by enough traffic?

Check it out in Street View - lives up to its name.

It's enough to get a man down.

If it's any consolation, this narrow route leads from Jackass Lane to Pratt's Bottom. What kind of tragi-comic psyches must the residents possess?

We have grave concerns about this street, and the neighbouring Drive, Lane, Gardens and House.

Not the sort of place you want to be delivering junk mail. 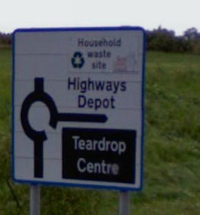 Bit of a cheat as it's just outside the M25, to the East near Swanley, and not labelled in Google Maps. But we couldn't leave out this place, which has perhaps the least propitious name for a business park in the world.

You'll need an A-Z to find this one as well, as it's not in Google Maps. Perhaps not a place to linger at night. Or ever. But the best/worst thing about Cutthroat Alley is that it leads into...

It's difficult to think of a more depressing name for a road than this alleyway behind Ham House. That is, apart from...

We'd love to know the story behind this one.

Got any more to add to this depressing admixture?