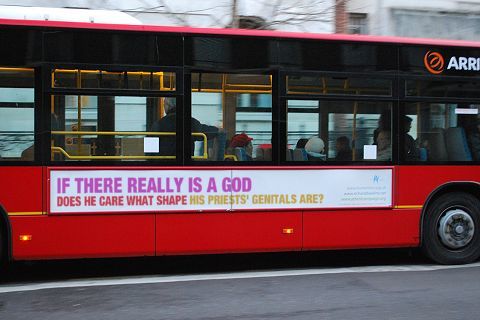 The Pope's visit to England next month is sure to provoke protests, campaigns and demonstrations of every flavour. Here's a curious one. The Catholic Women's Ordination group will take out advertising space on London's buses, asking the Pope to admit women priests into the church. The adverts, costing around £15,000, will run during the pontiff's visit on 16-19 September and will decorate buses passing Westminster Hall, where His Holiness will deliver a speech on the 17th. It seems the preaching on the bus goes round and round, following previous mobile appeals by atheists and three Christian groups.

Image courtesy of the Bus Slogan generator, and not connected with the real ad campaign.