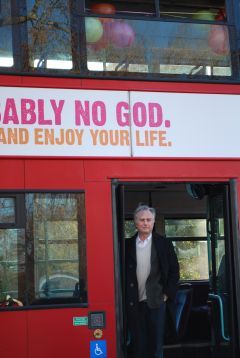 Richard Dawkins and the atheist bus
© Jon Worth / British Humanist Association
The atheist bus is here... and the atheist tube and the atheist TV screens. The campaign responding to a series of religious bus ads has now received a staggering £140,000 in donations from the public and the results are on show now. Nicely timed for Epiphany.

With that kind of cash sloshing around we're not just talking about one or two bendies either. 200 buses carrying the slightly hedge-betting (and actually agnostic rather than atheist) slogan "There's probably no God. Now stop worrying and enjoy your life" are rolling around the streets of London (plus another 600 across the country). From next Monday, 1,000 cards will arrive in tube carriages featuring the slogan and atheist quotations from people like Katharine Hepburn, Albert Einstein and the late lamented Douglas Adams. And if you manage to miss all that, head to Oxford Street: opposite Bond Street tube station you will see an animated version on two LCD screens.

The atheist / agnostic fervour is spreading internationally, too. Washington DC beat us to the punch with bus adverts in November, Barcelona buses have gone godless and Italy has plans up its sleeve too. Oh, for a photo of an atheist bus heading to the Vatican...

And what do the religious think of it all? Well, they're being very understanding. Turning the other cheek, almost. Think tank Theos say the campaign is "great discussion starter". We doubt there's going to be a return to theological debate, but there's certainly enough to spark the odd row down the pub.

If you see one of the ads don't forget to snap it and add it to our Flickr pool and tag it with 'londonist'...