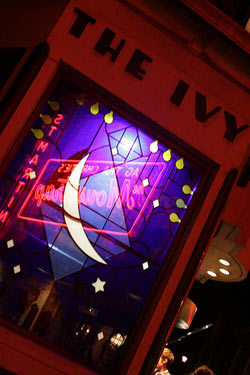 By AmySmiffy via the Londonist Flickrpool
Penning this week’s chapter is one of the most famous names to grace the pages of Len Deighton’s London Dossier, Milton Shulman. Shulman was theatre critic of the Evening Standard for almost 50 years, also finding time to write novels and plays and appear on radio game shows. He was married to Dossier contributor and top toff Drusilla Beyfus, and died in 2004.

Being a theatre critic must be a corker of a job at any time, but to have been one in London in the mid-60s must have been incredible. Treading the boards around then were (deep breath) Laurence Olivier, Vanessa Redgrave, Peter O’Toole, Paul Scofield, Peggy Ashcroft, Noël Coward, Ingrid Bergman, Michael Redgrave, Ralph Richardson, Alec Guinness, Anthony Quayle, John Gielgud, Claire Bloom, Richard Todd, Albert Finney, Joan Plowright, Maggie Smith and Ian Holm to name but a lot.

But it wasn’t just the quality of the talent. As Shulman points out, the theatre was at the vanguard of the phenomenal changes that were taking place in all aspects of London life. He even pinpoints the date at which it all started - 8 May 1956. That was when John Osborne’s Look Back In Anger received its premiere at the Royal Court, and in the process changed British theatre forever.

After that the floodgates opened, with London theatregoers being treated to works by a new generation of writers such as NF Simpson, Arnold Wesker, Bendan Behan, Harold Pinter, John Mortimer and many more. Northern accents were everywhere. Reviewers started using words like gritty, experimental and shocking as opposed to the usual fare of charming, magnificent and Lady Bracknell.

There was also a famous court action launched against the Royal Court’s production of Edward Bond’s Saved in 1965. This was at a time when the Lord Chamberlain’s office still acted as the state censor. The prosecution was met with ridicule and incredulity, and was pivotal in the abolishment of theatre censorship in 1968.

The National Theatre was around in 1967, but not in the much loved/hated South Bank building where it now resides. Instead it was squeezed into the Old Vic, where it singularly failed to cater for the eager audiences clamouring to get in. ‘If you’re planning a trip to London,’ Shulman advises, ‘it would be advisable to write several months in advance for a seat at the National Theatre and to take gratefully whatever you can get.’

If you were less picky you could have chosen from The Killing of Sister George, Beyond the Fringe, A Month in the Country or The Prime of Miss Jean Brodie. Musicals included The Sound of Music, Hello Dolly!, Funny Girl, Oliver! and, er, The Black & White Minstrel Show.

Shulman admits to being baffled by the 15-years-and-counting popularity of The Mousetrap. ‘A tired, old-fashioned, obvious thriller, the mystery is no longer who-did-it but who still wants to see it?’ Quite.

Variety at the Palladium included ventriloquists, pop groups ‘and the occasional dog act’. The bill was usually topped by ‘a broad comic like Michael Bentine, Frankie Howard, Benny Hill or Ken Dodd (a sort of Lancashire Ed Wynn).’ Ed who? *googles* He was the guy that played Uncle Albert in that bizarre plot swerve during Mary Poppins. The laughing guy hovering around beneath the ceiling. You know.

Outside the West End, Shulman guardedly recommends The Lyric in Hammersmith and the Theatre Royal at Stratford East. ‘They have recently had a chaotic career and it would be wise to check on the kind of play they are offering before setting out on a safari to these remote corners of the theatre world.’

Theatre bars ‘vary from the luxurious to the doleful’. Some are ‘supervised by elderly ladies who function at the speed dictated by the more advanced forms of rheumatism’. As for air conditioning, forget it. If it’s really hot, Shulman advises a boat trip on the Thames or the Regent’s Park Open Air Theatre.

For post-drama dining, Shulman suggests the Caprice, the Ivy and the White Tower (it was a Greek restaurant in Percy Street). ‘At the Caprice I once saw Epstein [presumably Jacob, not Brian], Somerset Maugham, the Maharaja of Baroda and Noël Coward all dining on the same evening at different tables.’

Shulman goes on to recommend a few music pubs for their entertainment value (‘the King’s Arms in the Old Kent Road offers modern rhythmic groups’), before concluding the chapter with a sobering thought.

‘Gaiety, abandon and irreverence never survive for long in BritainThe British feel much more comfortable being conventional, orthodox and institutional. The forces of conformity could close in at any time. But while the fun lasts, it would be a pity not to enjoy it.’

Indeed. Next week, Nick Tomalin looks at what ‘home’ means to your average Londoner and runs the risk of triggering the tired old North v South debate. See you then.