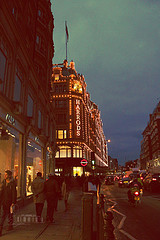 By - M7Đ..εїз..şħядтч ♥ ツ via the Londonist Flickrpool
Slim pickings this week from the guide that was ostensibly ‘an altogether new way of taking a city apart’.

The chapter on shopping turns out to be pretty much what you’d expect from any guide published back in the 60s, or indeed the 50s, with the emphasis on big department stores and those smaller shops that catered to the well-heeled (read American) traveller. Which is a shame, because although 1967 London wasn’t the psychedelic melting pot of hippies and hipsters, Beatles and beatniks, mandies and maximum R&B that our grasp of history can sometimes suggest, it was as formative in the retail sector as it was in other social trends.

Raising eyebrows and generating column inches were places like Granny Takes a Trip, Lord John, I Was Lord Kitchener’s Valet and many others. But do they get a mention in the London Dossier’s chapter on shopping? They do not. Perhaps this is because the book really was aimed at the well-heeled American tourist.

Or perhaps it’s simply down to the person who penned this particular chapter. See if you can guess who it is from this example of her immaculately-dressed writing style: ‘In London there is an immense reserve of merchandise for customers who appreciate fine craftsmanshipa woman’s incurable taste for personal luxury is given gloriously free rein.’

Yes, it’s our old friend Drusilla Beyfus, author of the chapter on Children.

Drusilla couldn’t be more Establishment if you stuck a tiara on her head and called her Sir Elton, so her advice for shoppers in London is all about where to buy Old Masters, classical and Middle Eastern antiquities, preserved butterflies and beetles, sixteenth century European furniture (‘Fuck! I was looking for fifteenth century!’); initialled velvet house slippers, embroidered braces and ‘weightless silk underwear’.

Shopping in Britain in general and London in particular is far better than anywhere else in the whole wide world, according to Drusilla, who probably hates it when anyone calls her Cilla or Drubies.

We need to purchase a tennis racket. ‘British sports equipment is first class.’ And some cups and saucers. ‘Britain is a by-word for fine china.’ We’re tempted to buy a smelly waxed jacket from, say, Belgium. Don’t! ‘London still cannot be beaten for the clothes we have always been famous for.’

OK, now we want a haircut in London but are worried about the atmosphere being inexplicably noisy and boisterous. ‘Having your face or hair done is probably a more restful experience here than in Paris or New York.’

We’re tired now and need a bed. But will we get a good night’s sleep? ‘British beds are the most comfortable ever.’

And so on. We particularly liked this telling comment on the decline of British manufacturing. ‘One of the most fascinating aspects of London shopping is the extraordinarily wide selection of goods from abroad.’ Fancy that. Abroad, eh?

To be fair, she does namecheck a few of the more with-it shops that had recently started sprouting like mushrooms. The original Biba gets a mention, along with Bazaar, Top Gear (no, nothing to do with Clarkson); Mary Quant and something called the Carrot on Wheels. Can’t think why that’s not still going.

But she prefers sticking to famous brands like Asprey, Liberty and Harrods and the other usual suspects. ‘The problem about advising visitors on the boutique beat’, confides Drusilla, ‘is that it’s always changing.’

You sense that change is not something Ms Beyfus heartily approves of: ‘A breakfast tray laid in fine bone china hand-painted in sprigs of roses remains one of those proven indulgences which survive criticism.’

Next time someone brings you one of those, don’t you dare criticise.

In his warm-up to the chapter on shopping, Len Deighton also focuses on the familiar - familiar if you’re wealthy, that is - although Camden Passage gets a mention. ‘A street market selling everything from scratched gramophone records to Georgian silver’. The Camden Head is worth a visit. ‘If the dealers have a good day it can become rather lively.’

Amongst the Fortnums and the Simpson’s, Len raises a flag for good old Marks and Spencer. Then he takes a seemingly random swerve to recommend a visit to Highgate Cemetery to see Karl Marx’s grave. It turns out to be not so unconnected after all, for we learn that the next grave along to Marx is that of a Mr Spenser.

We never knew that. Did you know that?

The rest of his intro is concerned with the practicalities of shopping in London, with advice on opening hours, early closing days (you’ll have to find something else to do between 1pm on Saturday and 9.30am Monday morning); who accepts credit cards and how much you should tip.

Oh, and it would be interesting to see if this still applies: ‘Most West End ladies’ hairdressers will provide eggs, bacon, coffee and orange juice for the customers, and with a bit of sweet talking, a man calling to collect can have his too. If you don’t mind breakfasting among the ladies and lotions then this might help you start the day on schedule.’ Anyone want to try that out?

Next week, Michael Wale looks at the London sporting scene of 1967.