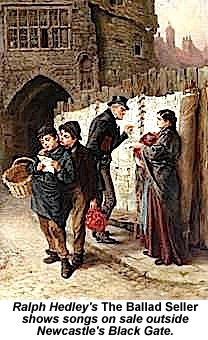 For 200 years, a lurid trade in other people's misfortunes was centred on the Seven Dials area of Covent Garden. Gallows ballads - rapidly produced broadsheets describing recent crimes - sung the malaises of the country's condemned, often selling hundreds of thousands of copies. A new essay over at the excellent Planetslade site explores the history of this hugely popular form of publishing, which only died out with the rise of music hall in Victorian times. Writer Paul Slade sets the scene:

A good murder could always be relied on to sell well, and these sheets often included a set of verses describing the killer’s crime or claiming to offer his last confession. Rather than printing music alongside the words, these ballads’ composers would often copy the structure of an old hymn and suggest their work be sung to that tune. All People That On Earth Do Dwell was a popular choice for this treatment, and one gallows ballad even had the cheek to start with precisely that opening line.

The well-researched essay goes on to describe some of the most celebrated balladeers and the crimes they covered. The article is also required reading for anyone with an interest in the history of news publishing, as Slade describes:

As soon as a suitable murder appeared, the first step was to produce a handbill-sized sheet with an initial report of the crime, followed by a larger version as soon as a few more details had emerged. Both of these would draw heavily on newspaper accounts of the case, and stick pretty closely to those facts. Once someone had been arrested, Catnach and the rest could print a confession - real or imagined - and follow that up in due course with a straightforward account of the trial.

Much, much more, including a selection of ballads in full, over at Planetslade. While you're there, take a good look around for some other superb essays, including the 1871 marriage of two 'giants' in Trafalgar Square and London's treasure hunt riots.