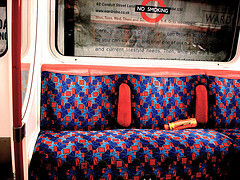 Image by chutney bannister
Faced with a probing question about the lack of transport options in southeast London, Boris Johnson did what any elected public official would do: he pulled an ace out of his sleeve by invoking the spectre of a long-rumoured southward extension to the Bakerloo Line beyond its current Elephant & Castle terminus.

Having read the last rites to Cross River Tram, Boris certainly owes his south-river constituents a morsel of hope to salivate over. But is this just another pie-skied idea from our dreamy Mayor? The notion is not a new one. In the 1930s plans were drawn up for an extension to Camberwell Green, but the War scuppered that idea. Further proposals cropped up in the Fifties and Seventies, yet never developed beyond carbon and ink. Ken Livingstone mentioned it two years ago, and TfL's own Transport 2025 document highlights the need for an Underground service in this area. Furthermore, one website details anecdotal evidence of preliminary discussions about an extension as far as Hayes, Kent, via Walworth, Camberwell and Peckham. Florid thinking perhaps, though Always Touch Out has a detailed report on the history of the project that's grounded a little more in reality.

Is any such scheme likely to happen? Not before 2020, and even then, the financial logistics could reduce a grown man to tears. That it holds even the tiniest grip on the Mayor's transport plans is a positive sign, but in the current climate it's perhaps unrealistic to hope for much.

This isn't the only concept Tube plan to have been rescued from the depot of history in recent weeks. In January we brought you the almost-forgotten patent for a non-stopping tube system, while London Reconnections recently delivered the Morgan Line, a hypothetical new service that would connect Chingford with Strawberry Hill via Hackney, King's Cross and Chelsea. Fantasy land, perhaps, but as Shakespeare once wrote while awaiting a delayed Hammersmith & City train, we are such stuff as dreams are made of.