Big Changes For London Before 2012 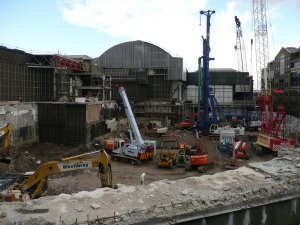 Photo of the Shard-as-building-site by Kill Pop from the Londonist Flickr pool
There's less than 1,000 days to go until the big torch is lit in Stratford and there's lots of stuff going on, but what about the permanent changes to the city taking place between now and 2012? Those lovely people at Visit London have pulled some of the biggest developments together in a nice, shiny PDF and we've shamelessly cherry-picked some of them.

We can expect 13,300 new hotel rooms to open up, including the finished transformation of Westminster Bridge roundabout and the reopening of the Savoy. We'll be able to say, "I remember when all this were nowt but cranes" around the Shard, Heron Tower, One New Change and Westfield Stratford, and Kings Cross will have been redeveloped and buffed to a fine finish (with a playground? Oh go on).

Cutty Sark will be restored, as will Hogarth's House. Extensions to Tate Modern and the National Maritime Museum will be built and open for visitors. We're a bit unsure about the timetable for some of the transport milestones, but fingers crossed for the Northern and Victoria line upgrades, connecting up the London Overground orbital routes and air con tube trains (perfect for changng to the Javelin, and the DLR extension at Stratford). Flying could even get slightly pleasant at London City and Heathrow Terminal 5.

It's all rather exciting, and a timely reminder that the Olympics isn't just about a few weeks of sport, jollity and cultural exchange, but a real impetus to change our streets and surroundings - hopefully for the better. This list certainly makes us a bit itchy for all the new stuff. Can we have a FlashForward to 1,000 days in the future please?