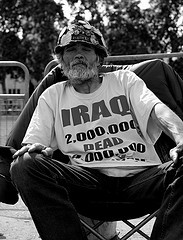 Photo by daredevil_81
3,000 days ago today, Brian Haw left his Redditch, Worcestershire home and took off for London, where he parked himself across the road from the Houses of Parliament and began a one-man anti-war protest. It was June 2001, and Haw was protesting against British and American sanctions on Iraq; September 11th, the deployment of troops in Afghanistan, the Iraq invasion of 2003 and the global marches against it, the July 2005 bombings, all were mere glints in the eye of suicidal madmen or hubristic politicians. It's difficult to overestimate how prophetic Haw's protest was.

Since then he's become a piece of award-winning art; faced eviction on numerous times; tangled with the police and been arrested; run as a political candidate; and grown a natty beard. The long arm of the law has tried to ruffle his feathers, pinging legal rulings and statutes at him like cluster bombs on Middle Eastern villages.

Yes he's still there, eyes cast accusingly at the burghers in their tower across the way, outliving Parliaments and their short-lived ruinous policies. In fact, he'll outlast the current PM, and the incoming chap is so concerned about having the Haw of Damocles hanging over his nascent government that he recently promised to have him removed should the Conservatives win. On their first day in office, probably, thus lancing their phony pledge to be the party that stands up for civil liberties.

And how does Mr. Haw plan to celebrate his 3,000th day? He doesn't care, and says that he's not interested in how many days it's been. Perhaps he'll consider a quick knees-up when he reaches Day 6,000 sometime in October 2017.