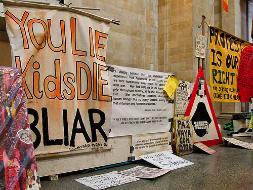 The Turner Prize may have been spirited away to Liverpool but Mark Wallinger's recreation of Brian Haw's protest camp outside the Houses of Parliament pre-SOPCA nailed the Turner Prize for him last night.

Although he chose to exhibit himself dressed as a bear, wandering around a gallery in Germany for the prize exhibition it was clear that the judges awarded the annually controversial £25,000 gong to Wallinger on the merits of his "bold political statement" and articulation of "fundamental human truths" in the installation State Britain.

State Britain recreates Brian Haw's ongoing one man protest campaign camp to the last detail, including all the photos and messages of support that people left with Haw to augment his supremely dedicated solo demonstration. The Serious Organised Crime and Police Act saw the camp largely demolished in 2006, so its full artistic recreation at Tate Britain had added poignancy, particularly as the site of the exhibit was bisected by the SOPCA exclusion zone.

It's not clear whether Haw, who originally told the artist to piss off when he approached him with the idea, will reap any financial reward from Wallinger's win but we're inclined to think not. After all, Haw's camp came together organically, grown from homemade banners and deeply held beliefs into a unique, inspiring, sprawling collage of politically aware statements made by many people. Wallinger's painstaking, prize winning identikit cost £90,000.

Turner Prize: A Retrospective 1984-2006 runs at Tate Britain until 6 January.