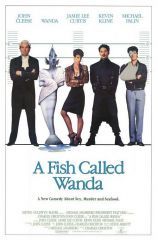 This is one of our favourite movies, and we were excited to finally watch it for Londonist. It’s an interesting London film, because although it’s set in London, the Londonness of the film is really incidental. It’s not really a plot point, and there are very few glamour shots of the city.

Master maniuplator Wanda (Curtis), slightly dim yet tempestuous Otto (Kline) and fish loving stutterer Ken (Palin) are part of a jewel heist team, run by George. Wanda’s pretty clever, and along with Otto, she manages to get George arrested so they can steal the diamonds. Unfortunately for her, George didn’t trust them, and only Ken knows where the jewels are. Wanda seduces George’s barrister Archie (Cleese) in order to find out what George is going to do, and much hilarity ensues. Oh, and Ken keeps trying to kill the only eyewitness who can place George at the crime.

The plot is dependent on all the characters lying to each other, and never being sure who can trust who. Trying to keep track of who Wanda is sleeping with and can be a little confusing, but it’s always entertaining. It’s really very funny, and very of its time. Wanda’s hidden video camera in her bag as she checks out the jewellery store is absolutely enormous. And when she and Otto check in for their flight to Rio, they’re offered smoking or non smoking. Doesn’t it seem strange that it wasn't that long ago that people could smoke on planes?

Most of the film is set in Maida Vale. That’s where George and Wanda live, and it’s where the little old lady Ken’s trying to kill live, so much of the action takes place there. The canal features quite prominently, which we liked. You don’t see London’s canals in many films, so it’s nice to see them getting the attention they deserve.

We do love this film, and it has the added bonus of a tiny part featuring a very young Stephen Fry. Oh, and it also has the most hilarious line ending a marriage ever: You can stick this marriage right in your bottom. We’re still chuckling over that one.

Time Spent In London: If we assume Archie’s house is in outer London, then the whole thing

Things They Got Right: We enjoyed the west London setting