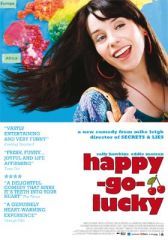 We were really prepared to dislike Happy-Go-Lucky. Relentlessly cheerful people, for the most part, freak us out. But if even cynics as cold hearted as us were won over by this film, then we think Poppy’s appeal is pretty foolproof.

Happy-Go-Lucky tells the story of Poppy, a thirty year old single teacher who may be the single most cheerful person we’ve ever seen on screen. It’s as if Mike Leigh thought to himself "what if your alarmingly cheerful primary school teacher was like that all the time?" and then made a film about her. Poppy is the kind of person that is amused by life. Her bike gets stolen, she has horrible back pain, she gets in a fight with her sister - all fodder for a good chuckle. She takes a trampolining class, just for kicks, then takes up flamenco with a co-worker after a trampoline related injury puts an end to that. She goes out and gets pissed with her sister and friends, and comes up with crafts for her primary school class.

But, of course, this is a Mike Leigh film, so it’s not all sunshine and roses for Poppy. She decides to take driving lessons and ends up with the world’s angriest man as an instructor. She notices one of the kids in her class having a problem with anger, and gets in a counsellor to try and help out. She visits her pregnant sister in Brighton, despite knowing that arguments and confrontation will arise. She goes out of her way to talk to a homeless man, and tries to make a small difference in his life.

The London in this film is very different than any of the other’s we’ve seen. It’s sunny! All the time! We can imagine that plenty of people watching this film will scoff and be all "but it rains in London always! We know this to be true! Books and films have taught us this!", but that’s where the real Londoners will stand out. Especially after having an actual sunny bank holiday weekend, we Londoners know that London can have gorgeous weather.

There aren’t any big tourist locations to be seen here, except for a cropped St Pauls that Poppy rides past on her bike. This is the London of Londoners, not the London of tourists. Other than the final wide shot of the Serpentine, the glamorous wide shots in this film are of the suburbs, or council flats, or schools. It’s full of pubs, and bookshops, and markets. We don’t know about you, but that’s the London we live in.

We very much enjoyed this film, despite our natural mistrust of cheerfulness. And we very much liked its London. It’s one we wouldn’t mind seeing more of in films.

Time Spent In London: Everything except 9 minutes in Brighton

London Icons Spotted: A cropped St Pauls, the Serpentine and the Camden Lock train overpass. That’s pretty much it.

Glaring London Errors: None that we noticed.

Things They Got Right: Pretty much everything.