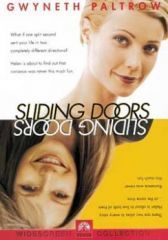 Sliding Doors gets kind of a bad rap when it comes to the London films. But, really, it's not all that bad. No, seriously. Even with the Gwyneth Paltrow and the slightly innacurate tube geography. We know! It's shocking information!

In the middle of Paltrow's Brit films (before Shakespeare In Love, and after Emma), this is one of FIVE movies she made in 1998. (Seriously, five Gwynnie? There's a reason the public got sick of you, you know.)

But we're not here to dwell on Paltrow's late nineties over-exposure. We're here to look at the London of Sliding Doors. The film tells the story of Helen, a PR exec whose boyfriend is cheating on her. Shortly after she gets fired for borrowing company vodka, her life takes an odd turn at Embankment station. A chance encounter causes her life to split into two possible futures. In one storyline of her life, she runs into a little girl on the stairs, and misses her train. In another, she dodges the girl and gets on the train. We then see how the missed/caught train affects her life - in the caught train version, she meets John Hannah, catches her boyfriend cheating, moves out, starts her own company, and falls in love. In the missed train version, she gets mugged, does not catch her cheating boyfriend, works as a waitress and sandwich girl, and is totally miserable. To make it easy to tell these storylines apart, the Helen who caught the train dyes her hair blonde.

There actually aren't too many glaring London inaccuracies. Helen lives in west London, and works in the West End. She takes the tube to work, moves in with a friend when she breaks up with her boyfriend, and her new business starts up in one room, not some huge glass office building. Geographically, it's not too bad either. Helen takes the District line, and while we can't 100% verify that it is actually a District line train (it looked a bit more like a Northern Line train to us), that's at least logical based on where she lives.

The only real geographical disjoint is when she gets mugged - she's just left Embankment station, but gets mugged somewhere completely different. Oh, and her cab driver actually takes her into the hospital, rather than just dropping her at the door. As if that would ever happen.

All in all, this is a pretty good London film. And a pretty good rom-com. It was the source of our crush on John Hannah, which has never really gone away. He's just dreamy! And, despite her annoyingness of late, we do harbour some residual fondness for Gwyneth Paltrow, and it's largely based on her early films.

This isn't really an overtly London film, but it's pretty true to life, and we did enjoy it. In the category of London Rom Coms, we give it the Londonist stamp of approval.

Time Spent In London: Virtually the whole movie, other than the cheating boyfriend's excusrion to Dorset.

London Icons Spotted: The film starts with some very lovey establishing shots of London and the Thames, Chelsea Bridge was spotted a few times, and Embankment station.

Glaring London Errors: Helen actually reponds to the cheerful, chatty guy on the tube who is trying to engage her in conversation. And the apologises for being rude to him! As if that would ever happen. People who try to talk to you on the tube are crazy. FACT.

Things They Got Right: Helen carries a book in her bag, and reads on the tube. Which was a little touch we enjoyed, because who gets on the tube without a book?