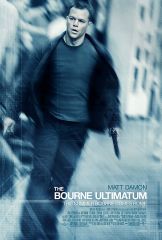 We’ll admit it. We are Bourne fans. How could you not be? Jason Bourne may be the coolest amnesiac reformed government killer ever. And Matt Damon has never been dreamier. The Bourne Ultimatum is the third film in the Bourne series, and as it ties up the whole “Who is Jason Bourne?” issue, we assume it’s the last. It only seems fitting that one of the coolest scenes in the whole film is set in London.

For those of you unfamiliar with the story, Jason Bourne (Damon) is a former CIA operative, who had been programmed to be the world’s best assassin. He lost his memory when he botched the assassination of an African leader and got thrown into the Mediterranean. In trying to figure out who he was, he met Marie and they fell in love. Awww. And then he got away from the CIA, and everything was happy. (That was all in The Bourne Identity.) But that didn’t last, and Marie got killed, which we’re still pretty upset about. Bourne found out he was part of a much bigger government project than he’d initially thought, and was framed for killing some CIA operatives in Berlin. He came out of hiding because he thought the CIA had killed Marie, but it turns out it was a Russian politician who had been working with his former boss. He escaped again. (And that’s The Bourne Supremacy.) Oh, he still doesn’t have his memory back. And now it’s Ultimatum time.

The London angle in the film actually sets up the whole plot. The codeword “blackbriar” is used by a Guardian journalist, Simon Ross (Considine) in a conversation on his mobile, which is picked up by the CIA. They set out to find out who his source is, as blackbriar refers to a super top secret CIA project and they want to find the leak. Coincidentally, Jason Bourne has read an article in the Guardian that mentions him by name, and is off to London to meet with Ross and find out what he knows. So, of course, the CIA thinks Bourne is the source and tries to have him killed. Whew. That’s a bit exhausting.

Bourne and Ross meet at Waterloo station, and that’s where the majority of the London action happens. Bourne has taken the Eurostar, and as this was 2007, his train would have arrived at Waterloo, so that’s all very logical. There are lots of spy shenanigans as Bourne tries to talk to Ross, realises they’re being followed and tries to keep Ross alive. Sadly, Ross has not learned the most useful information any character in a Bourne film can have: You always listen to Jason Bourne. Always.

Impressively, the action both outside Waterloo and inside makes a lot of sense. The only slip up we can see is the bus Bourne uses for diversion is a 43, and we don’t think it goes past Waterloo. The action moves from the bridge to the Southbank across the station in a logical manner. We did like Bourne calling the Threshers stand a “liquor store”, but just because it’s so American. But, of course, that’s exactly what he would say in that situation. There’s a lot of action behind the scenes at Waterloo, in the access hallways and stairways behind the shops, and as we’ve never been there ourselves, we can’t vouch for their accuracy.

The action at Waterloo is very impressive and well thought out. Sadly for Ross, he doesn’t listen to Bourne and gets himself killed. But Bourne gets Ross’s notebook and that sets him on the mission to expose Blackbriar and clear his name. And it’s all very exciting. A few too many chases for our liking, but still very cool. We really do love Jason Bourne.

We really do have to applaud the Bourne filmmakers for setting the action in a plausible location. A lesser film would have Bourne being chased through the London Eye or something silly like that. Waterloo is a very logical place to meet. Nice work, Bourne team. Nice work.

Glaring London Errors: The CIA guy running the mission calls Waterloo “Europe’s busiest terminal”, and we’re really pretty sure it’s not. And the thing with the 43 bus.

Things They Got Right: Most everything else. It’s a well made film.